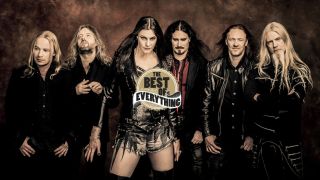 When Nightwish bassist Sami Vänskä left the band in 2001 due to musical differences with main songwriter Tuomas Holopainen, the Finns gave Sinergy’s Marco Hietala a call.

He’s remained a part of the line-up ever since and has provided his low-end proggy rumble, guitar and vocals to every album since the release of 2002’s Century Child.

We challenged the bearded, Tolkien-esque musician – wizard’s pipe and all – to pick the definitive Nightwish playlist. Of course, it came with a caveat.

“I’ve played on five of the studio albums, so let’s just go through those records in chronological order. I’ll start with two songs from Century Child,” says Hietala.

BLESS THE CHILD (Century Child, 2002)
“Bless the Child was actually the first song that I worked on when I joined the band. Before Nightwish I was playing bass and doing some background vocals in a band called Sinergy and we were warming up for the band in 2000. They called me when they had some trouble with their former bass player around 2001. They gave me a lot of freedom with the bass lines for this album, and I put in a few fills including the nice bass effects close to the end of this song.”

DEAD TO THE WORLD (Century Child, 2002)
“I have many happy memories from making this album and I got to do a lot of the vocals on this song. I’d been playing in bands for quite a while already, and I had a studio engineering side job, but once I joined Nightwish I didn’t really go back to that because I started touring a lot. Being Finnish country boys, we’ve always gotten along really well and this band has felt like home ever since I joined.”

THE SIREN (Once, 2004)
“We took a big leap forward when we released Nemo as a single, but I think my favourite songs from the Once album are Ghost Love Score and The Siren. The Siren is a weird piece because it almost has no lyrics and just a few lines, but it still has a vibe of its own. I really like the oriental mixes that we got on this song, and the story about the certain odyssey going on there.”

GHOST LOVE SCORE (Once, 2004)
“I’m a big fan of old prog rock and this is a song that has a lot of different parts going on, and different atmospheres in different places in order to support the story. That’s why I like this song; there’s lots of variety and the song is always interesting to perform live. My biggest influence from the prog world would be Jethro Tull, but I also love listening to Yes and Genesis and all those bands, and there’s a correlation between the structures and the length of a lot of their songs and this one.”

THE POET AND THE PENDULUM (Dark Passion Play, 2007)
“Here’s another long song! I love this one for all the same reasons that I said about Ghost Love Score; I like playing interesting songs with a variety of atmospheres.”

CADENCE OF HER LAST BREATH (Dark Passion Play, 2007)
“It’s hard trying to choose another song from this album because there’s a lot of good stuff on it, but I have a soft spot for Cadence of Her Last Breath. In some ways, we didn’t get as far with it as we wanted to when we recorded the song in the studio – we wanted it to be a little bit more impressive. I think it’s got a lot of potential, especially when we play it live, and it’s different to a lot of other Nightwish songs; the rhythmic structure and how the melodies go over it is unique.”

SCARETALE (Imaginaerum, 2011)
“This would have to be one of my favourite songs off the Imaginaerum record, because of the bonkers stuff we managed to do there with the middle part. We haven’t played the song on this tour but I’d like it to come back, so we’ll see what happens on the next tour.”

LAST RIDE OF THE DAY (Imaginaerum, 2011)
“I like the easy going punch that this song has. It’s a nice rock song and it’s always fun to do live. It’s a simple song, and I like the more straightforward rocking songs as well as the longer ones. Speaking of which, I managed to see Axl/DC a few weeks back and I thought they were great!”

WEAK FANTASY (Endless Forms Most Beautiful, 2015)
“This is a combination of an interesting metal song with a few interesting parts that dabble in Celtic folk with the acoustic guitars. This band and everybody in it is pretty open to using things that will fit the song; if it fits then we do it. I actually wrote the acoustic guitar part in the middle of this song, and I think it provides a nice dynamic difference to the middle of the song. It’s also got a nice rhythmic structure that we haven’t really done that much before, and it’s another good one to do live.”

THE GREATEST SHOW ON EARTH (Endless Forms Most Beautiful, 2015)
“I’m going to finish with The Greatest Show on Earth because of all the variety and ambition that we managed to put into this song. This band is pretty ambitious with the music that it makes, and at this stage this song is probably the culmination of everything that we’ve done together. But it won’t be the last.”

Marco Hietala was speaking to Matt Stocks. For more information on Nightwish, visit their official site.

Why Nightwish Are Now The Best Band They've Ever Been