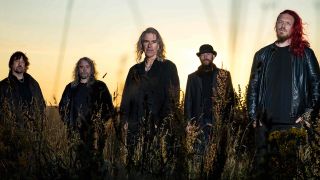 New Model Army have released a video for their new single Where I Am.

It’s the latest material taken from the UK outfit’s 15th studio album From Here, which launched in August through Attack Attack Records/earMUSIC.

“His pictures are incredibly alive and his subjects display an embrace of life combined with a certain attitude. They work perfectly with everything we wanted to say in the song.”

New Model Amy have released the Where I Am video to coincide with their current European tour, which continues tonight (October 9) in Paris and concludes in Nottingham on December 21.

Sullivan adds: “We're really looking forward to playing the songs live for the first time, knowing that by Christmas, they will have developed a life of their own.

“And with everything that's happening in the world these days, gigs seem generally more charged as if people need these kinds of gatherings more than ever.”

From Here was recorded earlier this year on the Norwegian island of Giske at Ocean Sound Recording Studio, which the band said had a profound impact on the way the 12 tracks developed.

New Model Army: From Here
New Model Army recorded the follow-up to 2016's Winter on the remote Norwegian island of Giske and features the singles Never Arriving and Where I Am.View Deal