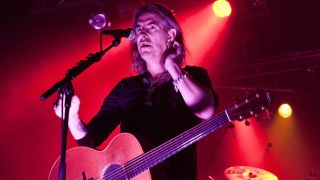 They were the embodiment of that famous old Groucho Marx line, the one about refusing to be a member of any club that would have them. It’s probably why, after 34 years and counting, their contemporaries have gone but they’re still here – still making new music, still looking forward, never looking back.

“At the very beginning, we were billed as this very left wing, red hot band from Bradford,” says Sullivan today. “Then the first thing that anyone heard was Vengeance, which was the most politically incorrect song anyone has ever released. That changed people’s minds …”

Thirty years on from that debut, Sullivan is the sole surviving member of the original lineup (and has been, really, since the mid-‘80s) and finds himself in a slightly unusual situation. The ultimate outsider band seem to have found some acceptance. Their latest albums, 2013’s Between Dog And Wolf and this year’s Between Wine And Blood have received justifiable rave reviews from a mainstream music press that once would not touch them with a barge pole. They play big shows in Europe – particularly Germany – and are now the subject of an expansive, career-spanning documentary, also called Between Dog And Wolf. In typical wilful Sullivan style, though, he laughs off all this love, even going so far as to critique the film for brushing over the band’s ‘90s career. Secretly, however, you suspect he’s quite touched that someone has bothered to make it at all – not that he’ll admit it.

“I’ve got mixed feelings about it. It is what it is,” he says of the film. “You can’t put a 34-year history of a band into a film. So [filmmaker Matt Reid] didn’t try, he just made what he thought would be an interesting film. So it’s necessarily selective. It’s not that it’s not true, it’s that it’s a version of the story – there’s an awful lot about the 1980s, then there’s a 20 year gap and it leaps to what we’re doing now.”

He has a point. The band struggled in the ‘90s when, having been on the verge of mainstream success, they consciously turned their backs on it and eventually ended up in a kind of creative cul de sac with Sullivan and his writing partner, drummer Robert Heaton, arguing endlessly. Little of that is in the documentary.

“We had a bleak period in the middle of the ‘90s where myself and Robert did what all established bands do at some stage – which is going into a studio and argue about music while forgetting to write any songs. We were arguing about snare sounds before we’d written any music.”

They were then rescued by a former tour manager, Tommy Tee, who told them: “the internet is going to change everything – we don’t need anyone else, we’ll set ourselves up as a cottage industry and fuck ‘em all”. Which, as Sullivan points out, “Suited us down to the ground because that’s always been our attitude. And it worked very well.”

But if that is brushed over in the documentary, what is included is a fascinating look into the defiance and energy necessary for a band to survive as long as 34 years. The story begins with the band’s formation in Bradford and their early years at the tail end of UK punk scene. Unsightly, angry and aggressive, New Model Army built a reputation as difficult bastards doing things their own way.

They played shows to nobody, sending searing punk blasts into empty pubs before an appearance on The Tube – then television’s most respected music show – changed things. Introduced as “the ugliest band in rock ‘n’ roll”, they played second single Great Expectations to a crowd that simply exploded. Invited onto to Top Of The Pops, they utterly refused to go on unless they could play live – something that hadn’t been done on the show since the ‘60s. It wasn’t because they were purists about playing live, it was more that they just enjoyed being difficult. And they got their way.

Soon after, Vengeance was making them stars and mainstream success beckoned – which is when they did a typically New Model Army thing.

“I remember in the early ‘80s,Vengeance threatened to be a bigger song than the band. So our response was not to play it,” says Sullivan. “Then later, in Germany, 51st State and Vagabonds became massive songs and we don’t play them there. If anyone ever expects anything of us, our instinct is always to go the other way.”

It’s this sort of perversity – Sullivan calls it “utter bloody mindedness” – that has steered their career. They’ve always shied away from being popular, somehow instinctively knowing it would not be for them – and perhaps the fact they never really exploded is why they’ve never burned out.

“Right at the beginning, you get in a room with a mate and you play music. And it’s great, it’s really great. And basically that should be it,” he says. “There has never been any thought about career, fame, money. They were always secondary considerations. The point was that it was great making music.

“In the early 90s we were poised to become quite a big band, certainly outside England. Now, when I look back, I can see that we shot ourselves in the foot lots and lots of times so that we didn’t have to be a big band. I don’t think we wanted it. If I think back to the times when we were at our most successful, personally those were the times I was at my most miserable.”

They were thought of as a political band, but they weren’t really – Sullivan, in fact, used to perform under the pseudonym Slade The Leveller largely so that the dole office wouldn’t realise that music was a source of income. “Some people think we’re a Chumbawumba type of band, that we existed for political reasons,” he says. “We existed for musical reasons, but it just happened that it interested me to write about what was happening in the world every now and again.”

And for that reason, they were neither accepted by the left-wing Red Wedge bands of the ‘80s and were also shunned by everyone else. In fact, they used to terrify people who could never quite pick their politics – and were refused visas to play in the US because they supposedly had “no artistic merit”.

“In the late 1980s there were a series of Greenpeace songs in the Albert Hall,” says Sullivan. “But we were told by Greenpeace that we weren’t appropriate. I was vaguely proud of that. I talked to a journalist once at that time, who said that other journalists sort of liked us but they were terrified to say they liked us because they didn’t know what we were going to do next week. As an accolade, that’s as good as it gets.”

But while the mainstream was wary of them – just as they were of it – those who loved the band found an all-embracing community among their fans. Their merchandise stalls became meeting places for their supporters and a network sprung up around them, with the not-so-secret membership card being the fact that both band and fans alike wore clogs (something Sullivan wearily says he is asked about in every single interview he has ever done).

“Someone once told me that our band basically appeals to people who are intelligent but who are trying to work through a large amount of personal darkness,” he says, before cackling with laughter. “Because the songs are about ideas from all sorts of angles and there isn’t an agenda, then they become quite contradictory. There are some bands who stand for human dignity and hope – your U2s and your Springsteens – and there are the sex, drugs and rock ‘n’ roll bands who are the opposite.

“I think it’s more natural for a human being to swing between the two. That’s how I find myself when I’m writing. Some mornings the world seems alright to me and I find sunsets beautiful, then some days I want to press the nuclear button to destroy the world.”

That very human way of thinking is what emerges from the documentary too, and as the filmmaker explores Sullivan’s vital relationship the band’s power-behind-the-throne and, in some ways, his muse Joolz Denby, Sullivan emerges as both defiant and thoughtful, passionate and intelligent. The film also explores the various comings and goings of key band members – bassist Stuart Morrow was an early cornerstone – and the tragic death from cancer of drummer Heaton.

Better, though, is the fact that it’s not a film for fans of the band. Those within the inner circle will know most of this – instead, this is a film for people with an interest in music, an interest in social history and for anyone who ever wants to know the sheer determination it takes to keep an underground band going for 34 years. Films like this, and the band’s newfound critical acclaim, threaten to take them overground once more – the ultimate outsider band finding acceptance at last.

Tell Sullivan this and he laughs, a long, loud, throaty cackle.

Between Dog And Wolf will be screened around the UK in November. Confirmed screenings are:

Q and A with Justin Sullivan, Matt Reid and Jonathan Green Tickets are £7.80/£5.20 concessions from www.theelectric.co.uk.