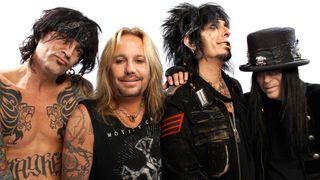 Motley Crue have released the anthemic title track to their much-anticipated new movie The Dirt.

The Dirt (Est. 1981) drags the classic 80s Motley Crue sound in the 21st century and features a cameo appearance from rapper and The Dirt star Machine Gun Kelly, who plays drummer Tommy Lee in the film.

Crue bassist Nikki Sixx tells Classic Rock: “I’m really pleased with the song. There’s tons of layers of different instruments and different things that we wanted to play around with.

"There’s some imperfections in there, too. So much music these days is so fucking tight and so perfect that it loses a little something.”

The Dirt (Est. 1981) is one of four new tracks the band reunited to record, nearly four years after playing their farewell show on New Year’s Eve 2015.

Sixx adds: “I was writing stuff, all the other guys are working on music all the time. So we sat down and listened to a bunch of ideas and boiled it down to the songs that we really liked.”

As well as The Dirt itself, the band have also recorded a cover of Madonna’s Like A Virgin for the movie. All four new songs will appear on the 18-track soundtrack alongside classic Crue tracks.

The Dirt premieres on Netflix on March 22 and the soundtrack will be released on the same day.