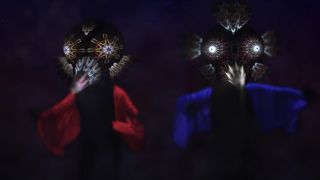 Mew have released a lyric video for their new track Twist Quest.

It features on the Danish trio’s upcoming seventh album titled Visuals, which will be out on April 28 via Play It Again Sam.

Lead singer Jonas Bjerre says: “This song took shape during a long jam session, like we hadn’t done in a long time. It’s a joyful song, with dark lyrics.

“I guess the song is about being confused and unable to keep your mind still from all the stuff that floats around it – the expectations we put on ourselves. But also there’s a sense of celebration in it.”

Mew previously released a promo for 85 Videos from the follow-up 2015’s +- which, like the new shoot, was directed by Bjerre.

Bjerre worked with kaleidoscopes on the video and said: “A picture of your messy desk turns into a strange flower. I like that you can’t really envision what it will look like until you see it. I think our music is a bit like that too – even as we’re working on it.”

Mew have a number of tour dates planned over the coming months in support of Visuals. See their tour itinerary, the album artwork and tracklist below.