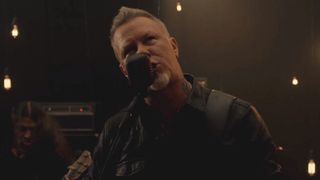 Metallica\u2019s James Hetfield in the video for Moth Into Flame

The director of Metallica’s video for Moth Into Flame has given fans a behind-the-scenes glimpse of how the promo was created.

The band recently released the video for the track, which appears on Metallica’s highly-anticipated 10th album Hardwired… To Self Destruct. It’s out on November 18.

In the video, director Tom Kirk explains his thoughts behind the video, the look he was trying to achieve – and it also features mainman James Hetfield driving a forklift truck.

Kirk says: “Metallica have always been on my radar as a band to work with.

“I like the way that they’re playing with the lightbulbs – they’re actually creatively involved in the video and asking good questions about how things are looking, the framing and references.

“It’s got the vintage looking bulbs which adds a nice texture and old sensibility to it. Even though I wanted to go for an old, retro, rock’n’roll video look, I’m bringing in much more modern elements, so hopefully those two things contrast and balance.”

Kirk also praises the band for their patience during the shoot, and adds: “I was amazed at how much they jumped into these concepts, how much they took them on board and just went with it. I didn’t hear a single complaint and I think they’re generally pretty happy.”

Earlier this week, Metallica invited fans to attend a video shoot on October 11-12 in San Francisco’s Bay Area for “lightly choreographed fighting” and to “cheer on while Metallica performs.”

Metallica have announced a number of live appearances in the coming months, with more to be added in due course.