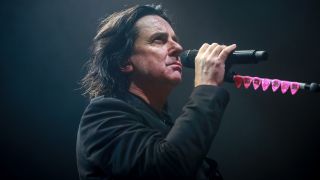 The landmark performance took place at the iconic venue on October 13, 2017, with tickets selling out in minutes – the fastest selling gig in the band’s 37 year history.

The set will be screened in Everyman Cinemas at Kings Cross, Esher, Chelmsford, Leeds, Birmingham and Bristol on March 26, with a DVD and Blu-ray titled All One Tonight released on April 2.

Reflecting on the night with eonmusic, Hogarth says: “People flew in for it from all over the world and it just had the most incredible atmosphere.

“We decided to film it and we decided to spend a lot of money on the production, so we put on a big show in there. The whole thing just came into phase on that one day, and proved to be such an amazing occasion.

“What I hadn’t really realised until after the show and talking to people and hearing the buzz on social media, was how the people who were there, the audience, had actually arrived there with the determination to make it a special night for us – which is kind of the wrong way around, really. We’re supposed to be doing it for them!”

Hogarth continues: “Not only had they bought tickets, but they’d arrived with a mission to make the night truly memorable for the band. I don’t think there’s a lot of bands on earth that have got fans that well looked after like us, in their hearts. It’s quite extraordinary.”

The vocalist says the pressure on him and the band to produce something magical that night was “colossal” and adds: “I’ve said before I felt a bit like Charles Atlas walking out there – I felt like I was holding the entire building up.

“I so wanted it to be extraordinary – I wanted everything about it to be the ultimate. As singer and frontman and all of that, that pressure probably weighs a little heavier on my shoulders than everybody else’s.”

He adds: “The reaction walking on stage from that sold out crowd, to see that there didn’t appear to be an empty seat, and to feel that vibration from everybody was really moving.

“Again, it was tempered all the time by a desire to live up to the vibe. It’s lovely to be adored, but you want to earn it. You don’t want to just stand back and go, ‘Oh yeah, cheers, aren’t we great?’

“You’ve got to leave people at the end of the night going, ‘My God, I always knew they were good, but they’re better that that, aren’t they?’ That’s what you want to aspire to.”

Marillion have just launched a deluxe edition of their classic 1994 album Brave and will embark on a run of UK and Ireland tour dates in April.