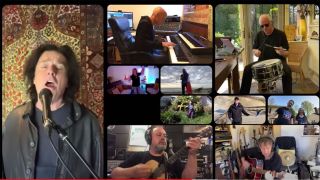 Marillion fans have joined forces with the band for a new lockdown version of the 1994 song Made Again. The band's manager Lucy Jordache put out a call to fans to help the band 'virtually' recreate the stage invasion that took place at one of the band's Weekends in 2013, now ingrained in band folklore. And the band had no shortage of video clips from fans around the world.

"We had the idea to do a 'lockdown' version of Made Again for you all," say the band. "Unbeknownst to us, our manager Lucy made a call (via social media) to ask fans to send in videos of themselves, in the hope of replicating the 'Made Again Stage Invasion' (at our Marillion Weekend in 2013) to surprise us!

"Lucy and Tim Sidwell (from Toward Infinity), then came clean to us of their plan and added our 'at home' videos and recordings into the mix. So here is a beautiful video of hope from around the world. A better way of life? For sure."

Made Again was originally on the band's 1994 album Brave. It also lent itself to the bands 1996 live album of the same name.

Marillion previously released a lockdown video of a new version of their 1989 song Easter.