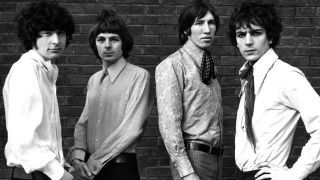 Pink Floyd have made their previously unreleased song Vegetable Man available to stream.

The song was written by the late singer Syd Barrett in 1967 and was meant to be included on their second album – but it was never issued. Listen to it on BBC Radio 6 by skipping ahead to 51:15.

The track will also feature on the forthcoming box set The Early Years 1965-1972, which will include 19 other previously unreleased tracks and seven hours of unreleased live material over 27 discs. It launches on November 11.

The set “will give collectors the opportunity to hear the evolution of the band and witness their part in cultural revolutions from their earliest recordings and studio sessions to the years prior to the release of The Dark Side Of The Moon, one of the biggest selling albums of all time.

“From the single Arnold Layne to the 20-minute epic Echoes, fans will see the invention of psychedelic progressive rock via an insightful collection that explores the Pink Floyd story from the time Roger Waters, Richard Wright, Nick Mason and Syd Barrett met at London’s Regent Street Polytechnic through to Syd’s departure and David Gilmour joining to form the iconic lineup.”

In addition to the deluxe set, Pink Floyd will also launch a 2-CD highlights album The Early Years – Cre/Ation on November 11. Pre-order both on the band’s website.

Waters recently recalled the “toxic” atmosphere within the band – saying Gilmour and Wright tried to drag him down. He is currently working on a new solo album.

Pink Floyd are the cover stars of the latest issue of Classic Rock magazine, which is out now in print and via TeamRock+.