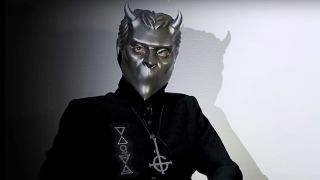 One of Ghost’s Nameless Ghouls has revealed he’s suffered from fear of the dark since childhood, because he watched horror movies at too young an age.

But he’s grateful for the inspiration his terror has provided over the years.

The Ghoul tells Rock 108: “I grew up watching a lot of films that I should have, way too early, which has led to a lifelong fear of the dark.

“I cannot be alone in the house and all kinds of stuff.

“But on the other hand, it’s triggered a lot of imaginary things that, luckily, for the most part, is used to create good things.”

He says his experience has led to taking care with his own children’s exposure to movies. “Right now the kids are interested in that Jaws film. I’m like, ‘Yeah, we should see that.’

“That scene where you see the corpse coming out, I had nightmares about that way into my teens. So you have to pick your ones.”

He aims to strike a balance between movies with a high entertainment factor where the horror elements are “clearly fake and too over the top,” and productions like Jaws and The Shining, which he calls “better, but more terrifying.”

He adds: “In a way, my favourite films that I want them to see are probably the ones that would cause the most damage.”

Reflecting on how his experience has influenced his own work, the Ghoul says: “I think that Ghost, in particular, is very much an outlet for that fascination. It’s a mixed-in fascination of music styles and pop-culture horror.

Ghost: We have Satan on our side