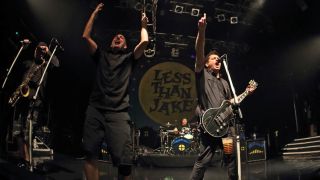 Less Than Jake have revealed the tracklist for their upcoming album Live From Astoria.

It was recorded in London in 2001 during the band’s three-night run at the city’s venue. It’ll be released on April 29 via Saint November Records.

Saxophonist Peter ‘JR’ Wasilewski said: “The London Astoria was always a special place for us. For a certain time it almost felt like a homecoming every time we played there.

“For us to be able to play multiple nights there on several occasions needed to be documented somehow. We hope our fans enjoy it as much as we did making it.”

The band have also released streams of Look What Happened and Suburban Myth from the package on Spotify.

Live From Astoria is available for pre-order.

The band have just wrapped up a US tour and head to Europe next month.

Less Than Jake Live From Astoria