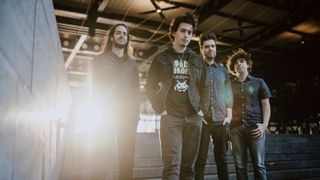 British prog rockers Kyros have released a video for new single Two Frames Of Panic. The highly personal track from band mainman Adam Warne is released tomorrow and features on Kyros' upcoming album Celexa Dreams which will be released through White Star Records on June 19.

“Two Frames Of Panic was the first track written for Celexa Dreams, and it marks a real milestone of significance for me; I wrote it as an outlet in the midst of when my mental health wasn’t in a good place," explains keyboard player and singer Adam Warne. "I had burned out pretty badly in 2016 and suffered a bit of a mental breakdown that resulted in my outlook on life taking a real beating.”

Warne was diagnosed with both panic disorder and agoraphobia and was prescribed antidepressants and, before long, began to experience unwelcome side effects - most notably vivid dreams and nightmares induced by the medication.

“I knew I had to write about this”, he continues. "Two Frames Of Panic, both musically and lyrically marks a real outpour of what I was feeling at the time. My perception was marked with chaos, confusion, overstimulation - yet on the surface, I was seen as indifferent, neutral, grey and nonplussed as a result of the medication. I used the song to get those feelings out of my head in a way that made sense to me and possibly to others.”

Kyros have also confirmed Celexa Streams, a virtual "tour" that will take place over the course of the next few months. In the absence of the ability to physically tour the country in support of their forthcoming album, Warne and the band will be hosting a number of live performances featuring songs from Celexa Dreams merged with fan favourites from their past releases. The band will also be appearing as part of the online Fusion 3.5 Festival, which will be streaming on 30th May.