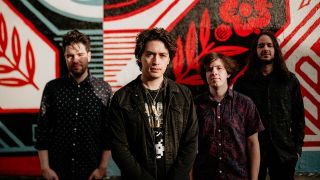 UK prog rockers Kyros have released a video for new single In Motion. The song is taken from the band's latest album Celexa Dreams, which is available digitally and today the band have released details of the album's physical release.

"The video for In Motion was a chance to make something that had a sense of nostalgia and reminisce to it, in much the same way the song itself certainly gives off a specific vibe," says singer and keyboard player Adam Warne. "Revolving around the use of VHS tapes and the effects and visual artefacts that come along with that, it’s a simple concept but hopefully one that will evoke a certain mood. I made it with the concept of both old VHS Karaoke tapes and the soft of early basic CG artwork designs you’d see on black tape covers in mind. Those geometric shapes, bold colours and strange sense of complete irrelevance to anything other than being definitively of ‘that time’."

Celexa Dreams will release as a digipak CD, featuring a 12-page lyric booklet, on August 14 through White Star Records. A double 180g black vinyl with printed lyric insert will be released on October 9.

The band are also continuing their series of monthly online gigs, with sets scheduled for July 17, August 14 and September 18.

"We are absolutely thrilled with the reception the album and our streamed performances have had so far", adds Warne. "It’s been absolutely incredible and given us all a real sense of a pride and motivation. We knew we were taking risks with this album, so it’s safe to say that we were incredibly anxious over how people would respond to it - but it’s been incredibly positive thus far. It's not over yet, though; Holding the physical version you’ve been collectively working towards as a band for years will mark yet another huge proud milestone moment for us, and it's one that I am especially incredibly excited for."