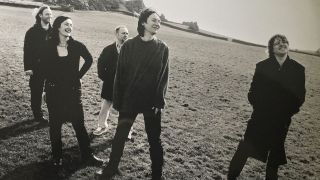 "One of the things I'm most excited about is an extra CD in The Book Of Iona Box set , making 17 in total," Bainbridge tells Prog. "Entitled the Sound Of Iona, this cd features new, mainly instrumental, recordings of many Iona tunes, with contributions from absolutely all past members of the band, including Troy Donockley (Nightwish), Terl Bryant (John Paul Jones), Tim Harries (Bill Bruford's Earthworks), myself and of course Nick Beggs, who was in the band from 1990 until 1994. Nick featured on two Iona studio albums: The Book Of Kells and Beyond These Shores.

"This track is called White Sands and this new recording features Nick on Chapman Stick and me on keyboards. This was one of the first pieces I wrote for Iona and was on the band's self-titled debut album, released in 1990.

"Also guesting on 'The Sound of Iona' cd is my good friend and fantastic vocalist Sally Minnear (daughter of Gentle Giant's Kerry Minnear). With this cd, the aim is to capture the essential timeless elements and atmosphere of the Iona sound as first envisaged by myself and co-founder David Fitzgerald back in the late 1980's, but also to bring it up to date with current sounds and technology."

The 17-disc career-spanning The Book Of Iona will be released through Gonzo Multimedia on June 20.

Pre-order The Book Of Iona.