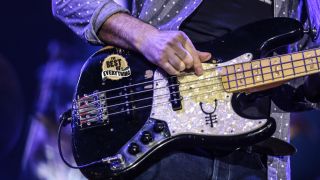 As a founding member of synth-pop band Kajagoogoo, renowned British bassist Nick Beggs has enjoyed chart success with the 1983 single ‘Too Shy’.

During his lengthy career, Nick has performed and recorded with the likes of Steve Hackett, Steve Howe and Steven Wilson. That’s not to say he exclusively works with those who have the name Steven. In recent years, he’s worked with Lifesigns, Fish On Friday and Lonely Robot, as well as playing live with Rick Wakeman and Prog award winners The Mute Gods.

10. ROGER WATERS
Nick: “Arguably the most important progressive rock artist of all times. Not noted primarily for his bass playing but more for his song writing and sneering vocal approach, this guy conceptualised the biggest selling live music show ever. The Wall. These are just some of the reasons he’s in my top 10 most influential bass players.”

9. GEEZER BUTLER
“It’s hard to argue who could be found at the heavy metal bass player epicentre. Although Lemmy should also take a fair bit of credit, Geezer Butler is another one of the breed who steered his band through highly creative times. Surprisingly funky and guttural in his approach, the blueprint for a new generation of greats was born. “

8. MIKE RUTHERFORD
“Often working between 12-string guitar and bass, his proto-prog roots are far reaching and influential. Tastefully chosen chords and bass lines bristling with nuance make this player one of the great ensemble players of a generation. And as with all these players his legacy yields tremendous substance and makes for highly rewarding study.”

7. STANLEY CLARKE
“The virtuoso jazz bass player who brought the instrument centre stage during the 70s. His choice of unusually light gauge strings and a very high/ mid sound made his playing more akin to that of the guitarist. His stamina for speed and power remind us of just how physical his approach was.”

6. PERCY JONES
“Another fretless player with a unique signature. Utilising incredibly fast thirty second and triplet note runs with harmonics in a highly original way, Percy bought panache to the world of the English fusion bass player. For reference you should listen to anything by Brand X. He notably influenced Mick Karn of Japan.”

5. TONY LEVIN
“An original thinker with a jazz schooling. His approach to all his instruments has seen the creation of new techniques such as double-handed tapping and the funk fingers. With his signature tone, it’s no wonder that he’s been so highly in demand for decades and continues to be one of the greatest and still working. If you ever get chance to read his CV make sure you allow yourself enough time.“

4. JOHN PAUL JONES
“This player is a producer, arranger, and multi-instrumentalist whose musical journey makes for a fascinating study in its own right. During my time in his power trio, I learnt more than any time in any band I’d been in before. His love of bluegrass has since sent him on a quest to play with other like-minded musicians as a mandolin player. He is the epitome of a progressive musician. Keep an ear open for his next project. It’s a killer.“

3. GEDDY LEE
“Fronting up a band as a bass player and vocalist is a tough gig – one with which I’ve had some experience. Geddy shows how it should be done. In a power trio, every little helps and additional duties on bass pedals, double-neck guitar and synths made for a fulsome sound in his stadium filling band Rush.”

2. JACO PASTORIUS
“Also often cited as the most influential player ever, his approach to Jazz and the fretless instrument was ground breaking. It’s hard to find someone Jaco didn’t influence. The 80s music charts were populated with hits featuring many Jaco clones – and for good reason.”

1. CHRIS SQUIRE
“My biggest musical influence ever. His sound and tone inspired a legion of players. Chris’ own inspirations were Paul McCartney and John Entwistle, two players who probably influenced more than most. But for me, Chris will always be top of the list. Sorely missed.”

Listen to the songs on our Spotify playlist: