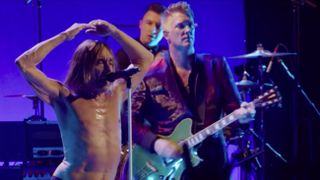 Iggy Pop on stage with Josh Homme and Matt Helders

The live package will be released on October 28 Eagle Rock Entertainment on DVD, Blu-ray, DVD+2CD and digital formats.

Recorded at the London venue on May 13 of this year, the set sees Pop joined by Queens Of The Stone Age mainman Josh Homme and Arctic Monkeys drummer Matt Helders – as well as QOTSA members Dean Fertita and Troy Van Leeuwen and producer Mike Sweeney.

The show was part of the tour in support of Pop’s latest album Post Pop Depression, written with Homme.

Discussing the collaboration, Homme previously said: “He is the last one of the one-of-a-kinds. This is a much deserved victory lap for a man who’s not sure if he won. But he did. He may have tunnelled underground for lots of that, but he still got to the destination.”

A TeamRock+ review of the Royal Albert Hall gig hailed it as “a performance for the ages.”

It added: “From the moment he bursts on stage, to the pounding rapid heartbeat of Lust For Life in a firestorm of flailing hyperactivity, even veteran Ig-goers recognise this as no ordinary show.

“Iggy is on fire. Beaming his crazed ‘n’ kooky Alfred E Neuman grin, he waves maniacally at tier upon tier of mirrored delight.”