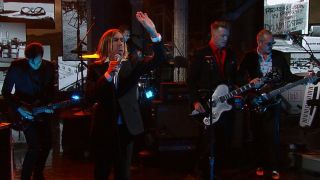 Due March 18 via Loma Vista, the pair recorded the project under the cover of secrecy at Homme’s remote Joshua Tree and Pink Duck studios.

Homme tells Colbert: “It’s easy to keep a secret when there’s nobody there to tell. It’s lovely because you have a chance to sort of make mistakes and figure things out and find your own path.

The sessions were rounded out with help from Arctic Monkeys drummer Matt Helders and QOTSA man Dean Fertita, who joined Pop and Homme on Colbert alongside QOTSA’s Troy Van Leeuwen and Chavez’s Matt Sweeney.

Gardenia is available as an instant download with pre-orders of the album.