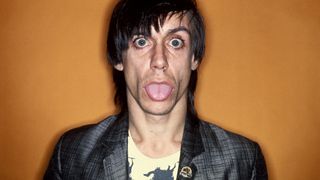 Sometime Queens Of The Stone Age collaborator and Mojave Lords guitarist Dave Catching is the co-owner and founder of the Rancho De La Luna recording studio in Joshua Tree, California. He’s also an Iggy Pop obsessive. We got him to pick his 10 definitive tracks by the iconic vocalist…

There’s only a handful of bands and artists that have inspired me on such a level. Iggy Pop is one of them.

He’s put out so many albums. All of The Stooges albums, and everything he put out afterwards have inspired me more than anyone because he always took real chances. He was always doing something that was totally unlike everything else at every time, and it was never because he was trying to do that, that’s just who he is. That kind of experimentation showed me that you can do anything, and you never have to be pigeonholed in one style music. And that’s the cool thing about playing with all the bands that I play with; none of us are stuck in any one thing. Iggy’s also written some of the best lyrics, and definitely put on some of the best live shows ever. You can tell he’s a really smart, sincere, wonderful guy that also can let it all out. He’s hurt himself physically and emotionally to give other people like me and you pleasure in his music. And he’s surrounded himself with great musicians that always took chances, and together they made music great for all of us…

10. TURN BLUE (Lust For Life, 1977)
I love this song. It has a tinge of gospel in it too. I was turned on to Raw Power – which this song is not on – and after the first listen of it, the next day I went out and bought Lust For Life and The Idiot, which had both just come out in 1977 so by ’78 they were both just getting to Memphis, where I grew up. There were a lot of bands that changed my life, but those three albums really did me in. And I love the gospel-tinged beauty ofTurn Blue. The lyrics are really incredible, and the guitar playing is great too.

9. NEIGHBORHOOD THREAT (Lust For Life, 1977)
I was really influenced by Ricky Gardiner, who was the guitar player on those first two solo Iggy Pop albums. He also plays a little bit on David Bowie’s Low. He just kind of came in and left. And they were to be the only three albums he ever did, but they’re all great and his playing is amazing. There’s a really awesome tone that he gets in the way that he plays and you can really hear that on Neighborhood Threat.

8. DUM DUM BOYS (The Idiot, 1977)
I love this song because they say, “How about Dave?” But that whole album, even though it’s not industrial, has the vibe of an industrial album. There’s something really bleak and weird about it, even down to the cover, which Bowie took himself of Iggy just outside in the snow. And Dum Dum Boys is one of those songs that plods along, and keeps building and building brilliantly.

7. STREET CRAZIES (Zombie Birdhouse, 1982)
Street Crazies is basically Iggy walking along and talking about everything that’s around him. It was one of the first times I’d heard really cool observational lyrics, and listening to it really makes you feel like you’re him, walking down the street with a pair of Walkman headphones or something on, just getting into it.

6. I’M BORED (New Values, 1979)
This album had James Williamson (The Stooges) producing, and this song sticks out because when it came out in 1979, I remember the phrase was on all of the badges that the punk kids used to wear. It was on every badge that every punker in the seventies had: “I’m Bored.” It’s one of those albums that a lot of people don’t really know much about, but it’s great.

5. GIRLS (New Values, 1979)
Another song off New Values. Scott Thurston plays the guitar and keyboards on this record too, and now he plays with Tom Petty, which is interesting that he went from that scene to that scene. And I love girls, obviously. They’re all over this world. How can you not relate to that as a young kid? I’d just turned 18 and that was the song that I was singing to myself everywhere I went.

4. FUNTIME (TV Eye Live 1977, 1978)
This is kind of cheating because this song is on a live album that does have some Stooges tracks on it, but Funtime was taken off The Idiot, and I have to pick a song off TV Eye Live because this was the tour that he had Bowie on. It just screams fun – when you’ve had enough of the working week and you’re just ready to have Funtime.

3. LOCO MOSQUITO (Soldier, 1980)
I love the whole Soldier album, but Loco Mosquito really starts it off. It’s the weirdest song, and most people probably wouldn’t pick this one at all, let alone so high up, but there’s something so joyous and weird about it, it kind of feels like a weird dream. Funtime means you’re going to go out to a club, and you’re going to have drinks and dance, and stuff. Loco Mosquito means you’ve fucking taken drugs and you don’t know what the hell’s about to happen…

2. SISTER MIDNIGHT (The Idiot, 1977)
This is the darker side of me talking. It’s very Doorsy, and it has everything that a song by The Doors would have in it. I love the little weird synth shit that they put in – just the little bits and blurbs – and it’s another one that just kind of rolls along nicely. I’ve played it in bands my whole life, and I love it.

1. MASS PRODUCTION (The Idiot, 1977)
Again, this song gets into the industrial thing, and it’s a very dirgy song, but the lyrics about him driving along and all the things he sees – it’s pretty heavy. And the way it plods along really draws me in, especially when the synths start going. It sounds like they were detuning the synths too, and it always puts me in a trance whenever I listen to it. So number one, there you have it: Mass Production.