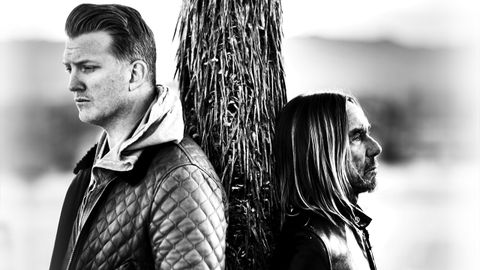 Perhaps it was Iggy’s friend and bête noire David Bowie who first convincingly demonstrated that a long musical life could feature something other than a sequence of diminishing returns.

It’s therefore all the more heartwarming that with David Jones having recently departed the planet, James Newell Osterberg has delivered a near-masterpiece that ranks as his best work in decades, evoking the glory days of Detroit and Berlin, without being in thrall to either.

Post Pop Depression has largely been touted as the brainchild of Josh Homme, and the QOTSA founder indeed deserves credit for a production that’s by turns gonzo and subtle, yet remains consistently intriguing. But Homme is only one part of the equation. Iggy’s singing is pretty much stunning throughout, while Dean Fertita – who worked with Brendan Benson, The Raconteurs and the Dead Weather, as well as QOTSA – and Arctic Monkeys drummer Matt Helders are more than mere makeweights, for their songs make up the throbbing rebel heart of this collection.

Ultimately, this is a quintessential Iggy album, and the genius of the supporting cast is their understanding of the blend of intelligence and malevolence that underpins his best work. It’s an intention that’s signalled from the first song: ‘I’m going to break into your heart, gonna crawl under your skin.’ You could say its megalomania and vaguely modal guitar riffs tap into I Wanna Be Your Dog, but in truth, with this song as with others, it’s the sense of invention and excitement that evokes earlier Iggy classics. As the songs roll on, the joy of discovery barely diminishes.

Gardenia, written by Helders, is similarly ever-shifting, opening with an almost Blah Blah Blah 80s beat, before another spiralling, intriguing chorus. Gardenias celebrate love but symbolise Morpheus too, and the song is appropriately anthemic but unsettling.

It takes only one or two listens to demonstrate that Homme is one of Iggy’s great collaborators. Like the Stooges or Bowie, he intuitively avoids the standard blues-rock form in favour of something more stripped-down and elemental, and while the songs come from various combinations of the four principals, they’re all locked into the same ethos.

The first Iggy composition on the album, America Valhalla, naturally recalls the theme of his last great album, 1993’s American Caesar. Yet it’s probably more inventive, a fucked-up My Sharona bass riff that sounds like someone’s amp fell down the stairs counterpointed by a plinking Oriental keyboard riff, and a deranged crooning chorus: ‘Where is American Valhalla?’

If anything, Homme’s own songs take a back seat on this album. His main solo composition is Sunday, which vaguely recalls Iggy celebrating the joys of public transport in The Passenger. It’s a strange beast of a track, Iggy’s avuncular singing swirling over an almost loungecore backing, then a brief snatch of female backing vocals on the fade, before a spine-tingling John Barry-esque orchestral outro.

There are moments when the music rolls out as you’d expect – for instance, the dense, stoner guitar riff that opens German Days – but the wonder of this album is how such moments invariably lead you into a sucker punch. On German Days, that rockist intro suddenly mutates into a swirling 6⁄8 love letter to, one presumes, Iggy’s days with Bowie at the Hauptstrasse in Schöneberg, the ‘days of champagne on ice’. A beautiful chord change from major to minor evokes Bowie’s exquisite craftsmanship, while the sheer sonic invention boasts all the adrenaline of anything from Lust For Life.

Yet for all the musicianship, this album never falls into the trap of sounding simply clever – it reaches deep into Iggy’s DNA. For instance, album closer Paraguay, another Fertita/Helders collaboration, evokes Pop’s Bowie-written synth-pop classic Hideaway, and begins with an a cappella opening that comes straight from the Mississippi hill country – home of Iggy influence and support act Junior Kimbrough. You don’t have to know the history to hear that this sounds somehow right, though.

It was over a decade ago that Iggy Pop told me he was worried about the albums he was adding to his pile of work, lest the later works somehow chip away from the legend. This album is a vindication of the instinct that less is more. It’s a magnificent testament to a man who has been scarred and damaged by his journey, but whose lust for life remains gloriously intact.