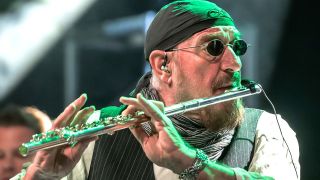 The eight dates will get under way at Manchester’s O2 Apollo on April 3, 2018, and wrap up with a set at London’s Royal Albert Hall on April 17.

Anderson says: “I am not usually a birthday or anniversary kind of guy but, just for once, I won’t be a party-pooper either!

“I treasure the memories of the earlier years of Jethro Tull repertoire, associated as it is with the adventures of visiting so many countries for the first time to connect with new fans around the world.

“And this is a celebration of all the 33 band members who graced our ranks – musicians who brought their talents, skills and styles to bear on the performances live and in the studio.

“Join me and the current band for a nostalgic evening of varied music, representative of my ever-changing songwriting as our careers progressed through the years.”

A ticket pre-sale will begin on August 30 via Gigantic.com and it’s been confirmed that there will be no support act.

Jethro Tull performed their first show on February 2, 1968, at the Marquee Club in London and released their debut album This Was later that year.

Find details of all eight shows below.

Ian Anderson on Jethro Tull and the importance of looking forward