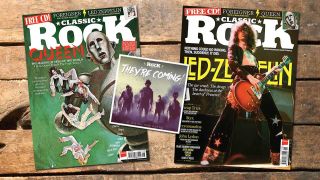 Classic Rock 239 is out today, and comes in two distinct flavours. One cover revisits Queen’s classic News Of The World album, while the second stars Jimmy Page as we look at the dramatic circumstances that led to the recording of Presence.

Queen
In the autumn of 1977, it looked as if the band’s reign might be over. Instead they hit back with the globally successful News Of The World and ruled once more.

Led Zeppelin
The story of how Presence, the band’s seventh studio album, climbed out of the wreckage of potential disaster.

Mid-year preview
There have already been some great rock albums released this year, but they’re only the start. We look ahead at some of the highly anticipated records still to come in 2017, including…

Black Country Communion
We kick things off by catching up with Glenn Hughes, as he, Joe Bonamassa and co. prepare for their return.

Living Colour
Politically charged and potent, their new album is attuned to events in the present while inspired by music from the past.

Alter Bridge
With a new mega live album (including rarities) and shows at London’s Royal Albert Hall on the way, it’s a busy time for Myles Kennedy and co.

Monster Truck
“If it ain’t broke, don’t fix it,” say the hard-rocking Canadians, as they finesse their established formula on new LP.

A Thousand Horses
We caught up with the southern, Skynyrd-esque bright sparks as they release their brand new record.

John Lydon
Never trust the music industry or nuns. Question everything. Religion is pollution. You don’t have to hate your bandmates. These and more help shape the former Sex Pistol’s world view.

Necromandus
Meet possibly the best band ever to have completely missed the boat when their ship really should have steamed in.

Styx
After 14 album-free years, they’ve surprised everyone by releasing a new album. The other surprise is that it’s rather good.

Biters
We take the Atlanta rockers vinyl shopping, give them 50 quid and see what fantastic plastic they spend it on.

The Stories Behind The Songs: Genesis
A four-minute ‘pop’ song rather than a complex prog epic, Follow You Follow Me opened the door to megastardom.

Six Things You Should Know About… Kenny Wayne Shepherd
The musician who helped bring the blues into the present reckons now is a “fantastic time” for the genre.

Buyer’s Guide: Saxon
South Yorkshire’s NWOBHM pioneers have recorded some of heavy metal’s defining albums. But which are their best?

Live Previews
Must-see gigs from Graham Bonnet, Dokken and Climax Blues Band. Plus full gig listings – find out who’s playing where and when.

Heavy Load: Mike Portnoy
“Hearing Dream Theater without me still hurts.” The former DT drummer on being a control freak, booze and having to choose between playing with Rush or Paul McCartney.