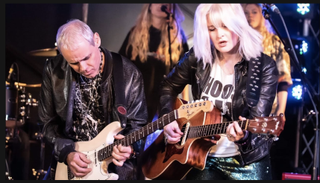 Heather Findlay has released a new video of Southern Shores ahead of her UK tour. The song is taken from her latest album Wild White Horses and can be seen in full below.

“It’s quite an eclectic album and it’s very me,' Findlay told Prog at the time. "I’m known as a bit of a chameleon and shapeshifter when it comes to styles and the way I use my voice, from the sultry rock chick, to the emotional balladeer, and I feel this album has really created the perfect platform to express the various sides of my personality, songwriting and voice."

Findlay kicks off her Wild White Horses tour with a full band in January.

“I am so happy to be hitting the road really soon with such a great team," she says. "My band mates and I have all been working behind the scenes on turning the album into a beautiful live experience and I’m now super excited to hear everyone in one room bringing the whole thing to life!”

In January, Findlay and her new band will play:

Ahead of the January tour dates Findlay will play a full band Christmas show at York's National Centre For Early Music on December 20. Support comes from Annie Donaghy.