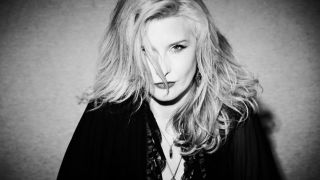 Heather Findlay has confirmed that her new album Wild White Horses will be released this summer.

The vocalist previously shared three trailers for the album she recorded at Rockfield Studios in Wales with producer and Thunder guitarist Luke Morley – and it’ll be out on July 5 through Black Sand Records.

Findlay says: “I’m delighted to release Wild White Horses. Although I have worked on a lot of albums and different projects over the past few years, this will be my first full solo album.

“It’s quite an eclectic album and it’s very me! I’m known as a bit of a chameleon and shapeshifter when it comes to styles and the way I use my voice, from the sultry rock chick, to the emotional balladeer, and I feel this album has really created the perfect platform to express the various sides of my personality, songwriting and voice.

“As ever, I have allowed myself to be pushed outside of my comfort zone, and there has been a lot of development and progression involved. I’m very proud of the album and cannot wait to see it being unleashed!”