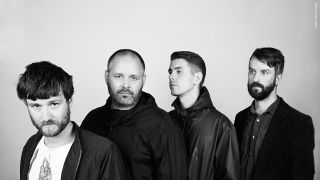 Swedish instrumental proggers Gösta Berlings Saga have released a video for their brand new single Basement Traps. The track is taken from the band's upcoming album Konkret Music, which will be released through InsideOut Music on July 24. You can watch the video in full below.

"The first single off Konkret Musik displays one of the many flavours of the new album. This minimalistic, rhythmic and synth-focused track and its naive melody lines, is released with surprisingly suitable timing. With a video paying tribute to the world's medical expertise, and audio inspired by the legacy of Florian Schneider, Basement Traps feels like a relevant and safe place in these weird and turbulent times.

"In the midst of these weird and complex times, we're very glad to present new music. Our new album Konkret Musik is probably the most varied GBS record to this date, with minimalism and total maximalism in unholy alliance. Can’t wait to share it with you!"

Konkret Music will be available as Digital Album, as limited Digipak CD and as 180g vinyl albvum with the entire album on CD as bonus. Next to the black vinyl version, there will also be limited coloured vinyl runs in Tansparent Magenta (100x from IOM Webshop) and Transparent Sun Yellow (200x from band).