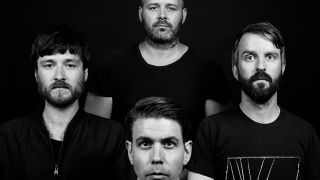 Gösta Berlings Saga have release a stream of their new single The Shortcomings Of Efficiency.

It’s been taken from the Swedish outfit’s upcoming fifth studio album ET EX, which is scheduled to arrive on October 12 via InsideOut Music.

The track features guitarist Henrik Palm, who has previously played in bands including In Solitude, Ghost and Pig Eyes.

The band explain: “During a period of time back in 2017 with no permanent guitar player, we had a series of productive and inspirational writing and recording sessions together with our friend Henrik Palm.

“By adding Henrik’s 10,000W brain and genre -defying guitar playing to the mix, the music was instantly led to darker places, creating an interesting synergy effect of energy and melodic outbursts.

“To top everything off, we asked Michael Berdan from the amazing NYC noise/industrial/hardcore duo Uniform – recently turned into a trio with the addition of Greg Fox of Liturgy and Zs – to contribute with something out of the ordinary to push the song over the edge.”

ET EX was recorded between May 2017 and May 2018 with producer Daniel Fagerström and was mastered by Heba Kadry at Timeless Mastering.