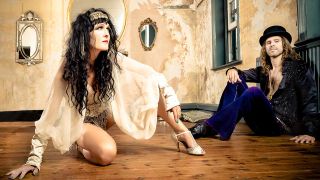 UK psychedelic proggers Goldray have released a brand new single, How Do You Know. it's taken from the band's upcoming new album Feel The Change, which is released on July 31. The double-A sided single is backed with Oz. You can watch the video for How Do You Know in full below.

“We really reached into our souls to make this record,” says guitarist Kenwyn House. “It’s always a huge challenge to make an album but we’ve really enjoyed the journey. This record seemed to flow out very easily out of us. It may seem like a very strange time to release an album right now with the current global situation. We know that a lot of bands have been cancelling releases at this time, but upon reflection though we felt that people need music now more than ever."

Written and produced by House and Rasmussen and mixed by Pedro Ferreira (The Darkness, Therapy?, Enter Shikari, Meatloaf, David Gray) at Spinroad Studios in Gothenburg, Sweden, the eight-track Feel The Change gives Goldray a heavier edge but at the same time sounding more accessible than their debut Rising whilst still remaining deeply bedded in their psych roots.