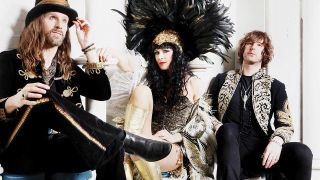 A band can get a lot done in seven years. The Beatles released 12 albums. The Doors formed, put out six records, lost their singer and wobbled on for another two. Rick Wakeman joined The Strawbs, made an album, left, joined Yes, made another three, left, made four solo records, and joined Yes a second time. But deep in London’s leafy Brockley, things move at a more sedate pace: Psychedelic proggers Goldray, formed in 2010 around a nucleus of former Reef guitarist Kenwyn House and singer Leah Rasmussen, have finally released their debut album, Rising. So what’s taken so long?

“The twisting turns in the road can take you on different paths,” says House, rather mysteriously. “We had various options, but eventually decided to take our own route and do it ourselves.”

“Last August things finally came together,” adds Rasmussen. “We got the right people and the right energy.”

Energy seems to be an important word to the pair. They pepper their conversation with references to it, and to freedom, and to the importance of art, magic and beauty. It’s the kind of discussion that’s increasingly rare in the era of 140-character fury, when people greet strangers with aggression rather than curiosity and the President of the US seems more interested in checking his phone for personal slights than he is in diplomacy.

Rising, Goldray’s debut album, is out of step with such a world. It’s also very good. A collection of songs firmly in thrall to West Coast 60s psychedelia, it’s equal parts Jefferson Airplane and The Doors, dressed in Kings Road finery and embellished with all sorts of spiritual trinkets. The Oranges Song sounds like early Pink Floyd tackling a parallel universe version of The Beatles’ Hey Jude written by George Harrison rather than Paul McCartney, Gypsy comes on like Patti Smith’s Dancing Barefoot by way of Woodstock, while Eyes starts off with a riff that isn’t too far from The Small Faces’ Tin Soldier before veering off to explore parts hitherto unknown. House’s guitar underpins everything, from churning riff to spiralling solo, while Rasmussen soars above it all like Siouxsie Sioux channeling Grace Slick. There’s even some hurdy gurdy.

It all comes in a colourful sleeve (below), full of eastern promise and mysterious iconography. “Every body of work needs a wrapper, and it’s one hell of a wrapper,” House tells Prog. “I can’t tell you what any of it means, though, because then I’d have to kill you.” We think he’s joking.

If this all sounds like a return to a time when people packed their lava lamps and bongs into battered suitcases and escaped to San Francisco with flowers in their hair, then Goldray are committed to the journey. In fact, they’re probably driving the bus.

“This is the beginning of a whole new way,” adds Rasmussen. “It’s going to be massive. 1967 is about to happen again.”

What’s more, they don’t think they’re alone. This is a movement. “The Flaming Lips did it in the 90s,” says House, “and I really appreciate what they did for the scene. But when we were writing our record we heard Tame Impala, and they blew our minds. And we didn’t feel quite so alone. I feel the same listening to Uncle Acid And The Deadbeats. I see seeds within the current music scene that are quite encouraging. Purson were another band who made us not feel so alone.”

“I’m really sad they broke up,” Rasmussen says. “I had real hope for them. I thought they were going to be big. They had everything.”

Another thing Goldray have in common with Purson is a taste for spectacular threads. Leah and Kenwyn look like the triumphant winners of a trolley dash competition at a high-end Haight Asbury boutique, decked out in paisley and silk, feathers and gleaming gold.

“Would Jimi Hendrix have been Jimi Hendrix if he’d just been wearing jeans and a t-shirt?” asks Rasmussen, quite reasonably. “You need to reach all the senses. It’s art. It makes a statement of freedom and liberation. When you transform into your persona, you turn into someone else. When I walk onstage, I feel like I’m not the person I was a few hours ago. Something else has taken me over. When you dress up, you walk into another realm.”

“If you look at the great bands from the era we love, they’re all wearing capes and stabbing their keyboards with kitchen knives,” adds House. “It’s got to have a visual side or you’re missing a big chunk of the story. If you’re an artist, you need to embrace the role. It needs to be magical. No one wants to see normal.”

“When we first started writing the album we looked at each other and said, ‘My God, this is way out!’” says House. “At that time psych wasn’t really happening. We were in our bubble, doing what we wanted, and when we lifted our heads we realised there was a movement going on! There’s this endless march towards totalitarianism, and we need people to say, ‘No! I’m not going to go to work today! I’m going to stay at home and learn to play the sitar and grow my hair!’”

Rising is out now on Akashic Records. See www.goldrayband.com for more information.

Goldray: "One of the most outrageous things you can do is be a rockstar"