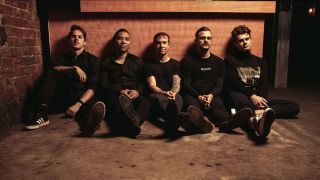 Australian prog quintet Glass Ocean have released a lockdown video for their new song Bolero. The sing is taken from the band's upcoming debut album The Remnants Of Losing Yourself In Someone Else, which will be released through Wild Thing Records on August 21.

"Bolero represents the sentiment and understanding from being rejected," explains singer and songwriter Tobias Atkins. "That attractive soul across the room may not want to dance with you. It may be because of their preference, or it might have something to do with how you represent yourself. How is it that you express desire and engagement in the outside world? Is it the real you or something else? Expressing the truth, with no filter or mask will attract something greater than impulsive desire. Maybe then the real dance can begin.

"During the shooting of the video for Bolero, the country was right in the midst of its strictest lockdown measures. This made production requirements difficult to obtain. The silver lining was a chance to get creative with minimal tools, crew and sets. So my mum and I used what we could under the corona restrictions to come up with something we were really happy with. Along with the amazing editing skills of our chief of visual Adrian Goleby we ended up with something simple and vibrant."

The Remnants of Losing Yourself in Someone Else has been produced, mixed and mastered by Chris Blancato (Northlane). The album started out as a concept narrative record which evolved through the creative process into an honest exploration of personal themes.

“The band set out with a vision to write a specific story," says Atkins. "However, it became difficult to force a narrative that wasn't the truth. Instead, something entirely different emerged. The real beating heart of the album, the idea that the songs were the remnants of losing yourself in someone else”.

The album delves deeply into the highs of love and romance, and spirals further into an underworld of loss, tragedy, and malevolence.

“We build structures, only to tear them down," adds Atkins. "What was once there is gone, and replacing it is the remnants of who you are and who you wanted to be; a never-ending dialogue of forces subordinate to an ever-changing ideal. For better or worse, they exist here by the will of your own creation, through which we journey to find a covenant within ourselves and the world around us”.

Pre-order The Remnants Of Losing Yourself In Someone Else.