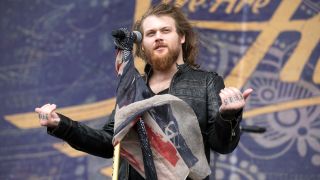 Danny Worsnop has opened up on his decision to rejoin Asking Alexandria – and he insists his solo career is still his “primary focus.”

The band confirmed Worsnop’s return on Saturday after weeks of speculation over their future. Guitarist Ben Bruce said they had split with Denis Stoff (aka Shaforostov), who only replaced Worsnop 18 months ago.

Now Worsnop has released a statement about his decision to return to the band and he insists We Are Harlot – the band he formed before leaving Asking Alexandria in the first place – will continue, as will his solo career.

Worsnop says: “Two weeks ago, I was approached with a question, if I would consider touring with my former band, Asking Alexandria, for their upcoming tour 10 Years In The Black.

“Now, keep in mind that outside occasional, ‘Hey, man, how’ve you been?’ texts, Ben Bruce and I hadn’t spoken since my departure – and the rest of the band, not at all.

“It was a long week pondering the decision and figuring out what the right thing to do was. After all, my solo album, The Long Road Home, is about to release, which is, of course, my primary focus.

“I’m also working on the new We Are Harlot record, and trying to book in as much acting work as possible.

“Eventually, the pivotal hour came about and it was time to make a decision. I took this last year off from playing and touring to find myself (pretentious) and re-evaluate my life (cliche), which I NAILED (badass).

“So, now, after almost two years, I shall be going on tour again with Asking Alexandria.”

Worsnop says he has been rehearsing with Asking Alexandria for the last week, honing their live show ahead of the Sumerian 10 Years In The Black tour, which kicks off in Seattle on October 25. He also hints at upcoming European dates.

He says the shows will be “a journey through the band’s history” and will also feature “a new song that isn’t actually very new.”

He adds: “I’m now in a place mentally where this is something I can embrace again, with the men I started this crazy journey with. It’s a beautiful nostalgia that feels like nothing ever changed.”

“All I can speak to is my excitement to be working with my old and dear friends, playing music we made for a decade that we are here to celebrate.”

Tickets for the band’s upcoming tour dates are available at their official website.

Worsnop’s next solo singer Mexico is released on November 1 and the second We Are Harlot album is in the works.

Asking Alexandria recorded one album with Stoff – this year’s The Black.