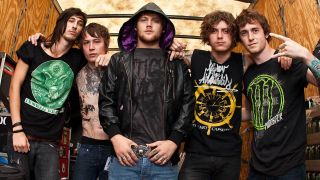 Hands up who’s shocked that Danny Worsnop is returning to Asking Alexandria? Anyone? Nah, didn’t think so. Speculation that Danny was returning to take up the mantle filled by Denis Stoff for the past year began in the last couple of weeks, when Denis was noticeably absent from his bandmates’ Instagram posts. Fans turned detective and brought up the fact that he reportedly ditched his old bandmates in the Ukrainian outfit Make Me Famous, and sure enough, Ben Bruce confirmed in a Facebook live stream that Denis had gone AWOL, and Danny was back in the game.

Given the trash-talk flying about when Danny and AA parted ways, it would be easy to raise an eyebrow at his return. Ben said at the time that Danny’s musical tastes were at odds with the rest of the band after he skipped off to the Sunset Strip to pursue his hair-metal dreams. Pursue is the operative word here; camp Worsnop hasn’t been particularly fruitful. His band We Are Harlot released their first and only album last March, and despite it being received well in the music press, didn’t set the world on fire. The band have been pretty quiet since then, with Danny focusing on his solo project. The songs he’s released so far from his country album The Long Road Home (formerly The Prozac Sessions) seem to have gone down alright with fans judging by conversation on social media, but it’s taken a bloody long time to get anywhere. Danny first started work on it late last year, and it’s only recently that a release date was set for February 2017.

Danny’s devil-may-care attitude also veered into the realms of self-parody since leaving AA. He’s always been a swaggering, boozy frontman, but without the collective entity of the band behind him and Ben Bruce’s overgrown teenager persona to bounce off, Danny lost his edge. Fans began to mock his frequent tweets about boozing and hangovers, as well as the new American twang in his voice. His attempt at being a larger-than-life rock star fit for a cameo in The Decline Of Western Civilisation II fell a bit flat.

On the other end of the scale, AA’s personality deflated. Denis, while arguably a better vocalist than Danny, certainly didn’t have the same charisma about him. Most press engagements were left to the jovial Ben, and while it’s not unheard of for frontmen to leave public speaking to another band member, it was a serious shift in dynamic for AA. Danny and Ben had been something of a double act – their now-rekindled friendship predates the band – but Denis was more guarded in interviews. Soundbites from him were more likely to contain stock lines about loving the fans and being grateful for the opportunity, rather than anything even touching on sex, drugs or rock ‘n’ roll. His vocal ability meant fans accepted him anyway, and The Black is undeniably a strong album, full of huge sounds and a more mature songwriting approach. Denis was a safe bet – but what would ‘safe’ ultimately have meant for AA’s future?

Of course, we’ll never know what another album with Denis would have sounded like, or whether he’d have loosened up if he’d stayed with the band. But we do know that AA was a crazier, livelier and more hell-raising entity with Danny at its helm. His unpredictability is polarising, but it also made things exciting, while there was never any doubt as to what you’d get with Denis. What the reunion means in terms of AA’s sound or Danny’s other projects remains to be seen, but one thing’s for certain: it won’t be a quiet one.