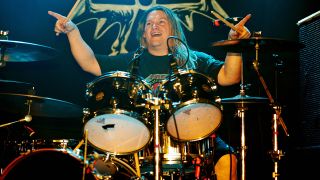 Corrosion Of Conformity drummer Reed Mullin has died at the age of 53.

The news was confirmed on the band’s social media channels earlier this morning in a short statement, which reads: “Reed, it’s with heavy hearts that we say goodbye to a friend, a brother and pioneer.

"Love and condolences to the family, friends and fans who will miss you and thanks for the music.”

Mullin co-founded Corrosion Of Conformity with guitarist Woody Weatherman and bassist Mike Dean in 1982, with the band releasing their debut album Eye For An Eye in 1984.

He returned to the fold in 2010, and appeared on the COC's self-titled eighth studio album in 2012 and also featured on Corrosion Of Conformity’s last two records IX and No Cross No Crown.

In 2012, Mullin suffered a seizure while on the road with the group, and in 2016, the drummer was forced to leave Corrosion Of Conformity's tour with Clutch and Lamb Of God after suffering an alcohol-related seizure.

Tributes to Mullin have begun to come in from the world of rock and metal, with Stone Sour and Hellyeah’s Roy Mayorga saying: “What an amazing drummer. He was definitely an influence and had a huge impact on myself and so many others. I remember the first time seeing him crush those drums so fast and so powerful. He was epic!”

Faith No More frontman Mike Patton said: “Damn! So sad to hear about my ol’ pal Reed Mullin. Rest in peace my friend.”

Eyehategod’s Mike Williams added: “I don’t know what to say. He was my friend and I’ll miss him. This one hurts.”

The cause of Reed’s death has not been made public.