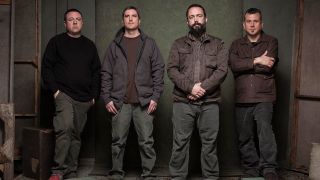 CKY might be best known for skateboarding videos, dicking around with shopping carts and providing music for Jackass, but did you know they’re also massive Clutch fans? Drummer Jess Margera in particular loves the bluesy rifflords, drumming for supergroup The Company Band which features Neil Fallon on vocals! We asked Jess to pick his ten favourite Clutch songs of all time, and he responded with eleven of his top tracks – because how can you choose just ten?!

“One of the most powerful songs ever written, in my opinion. If you have ever lost a close friend or family member and had a tough time with it like I have, this song can probably help a little bit. Especially after a few beers.”

“This song has become a recent favourite of mine, given our current political climate. The line ‘So many tomorrows to sell’ really resonates with how bible-thumping politicians roll lately. Don’t they have kids and grandkids? The planet is probably going to be a stinking, smoking ball of shit in 20 years, just so their oil buddies can have four summer houses and a fucking yacht.”

“This song is about the Lemmys, the Chuck Berrys, the Bonhams and Keith Moons. Or in other words, a person who lives and breathes rock ‘n’ roll for their entire existence on Earth. I aspire to be an Earth Rocker, but I’m probably too much of an asshole. I hope that in the event of my death a CKY tour will have to be cancelled.”

“This album still sounds as weird and awesome as it did when I bought it 20 years ago. A somewhat heavy band from Maryland heavily influenced by Fugazi, Deep Purple and Bad Brains went into Jimi Hendrix’s studio and got John Lennon’s producer. That is as strange as it gets, and the results are like nothing I have ever heard before. In a good way.”

“I had to pick this, even though the entire Blast Tyrant album is amazing from start to finish. My brother directed the video for it, which I had mixed feelings about at first. I wasn’t entirely sure Bam’s brand of humour would sync up with Clutch’s brand of humour – I was wrong. The song is amazing and the video is amazing. Ryan Dunn should have won a Grammy for his performance of getting his ass kicked at a biker bar.”

“Clutch took the Zeppelin route on this one. They borrowed some old public domain blues standards, added to it, and made it their own. Lemmy called this song Clutch’s Ace Of Spades, and Lemmy was never wrong. As a drummer I am really jealous of JP’s flawless shuffle beat vibes.”

“This line should be taught in schools: ‘First they tell ya you’re gonna lose your soul, and then they tell ya find another home, and then ya take a good look around and they stole your rock and roll, and once it’s gone you’ll never get it back.’”

A Quick Death In Texas

I Have The Body Of John Wilkes Booth

“When I was a kid I spent a good chunk of my life camping on the Chesapeake Bay at my grandparents’ place. It was on a part of the Chesapeake called Sassafras Cove. This song is about some fishermen on a boat in Sassafras Cove that hook a casket, reel it in, crack it open, and… Hey! The body of John Wilkes Booth! Do I hear a million?”

“The first Clutch song I ever heard. You have to understand it was 1993; all my friends hopped on the Pearl Jam and Nirvana bandwagon. I put this song on to piss them off.”

CKY’s new album The Phoenix is onsale June 16, via Long Branch Records, and is available to pre-order now on iTunes. Check out the new video for Days Of Self Destruction below.

CKY are currently touring the UK at the following dates:

CKY team up with Mastodon’s Brent Hinds for new track

The 10 albums that changed my life, by Clutch's Neil Fallon