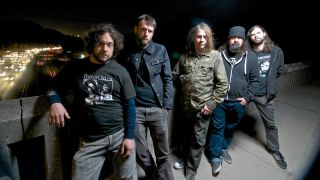 Ahead of the release of Eyehategod's self-titled fifth album, we fired some questions at the frontman of the sludge metal pioneers

Why do people call you that?

“It’s just a nickname. It’s something that happened after Hurricane Katrina when people starting putting signs up saying ‘Free Mike Nine’ because I went missing for a while.”

You escaped Katrina, right? It was a total social breakdown with people stealing, pillaging, there’s no police presence whatsoever – then what happened?

“I was there for a week after it happened. The neighbourhood I was in didn’t flood, which sounds like a good thing but it wasn’t. Everybody from all the other neighbourhoods came to mine to rob and steal and do whatever to survive.”

There was no government presence for days. If you didn’t have a place to live in, then you had nowhere to live?

“There were helicopters coming in to save people but I don’t know if that was private companies or the army etc. But as far as the federal government coming in it was at least a week before they sent any actual aid and stuff like that. It was amazing they let that happen.”

We read that it was actually Phil Anselmo that helped you out and gave you somewhere to live.

“I’m still there! It’s his guest house. They call it Nosferatu’s lair – it’s the practice room and a studio, and I live upstairs with three cats, a dog and my wife.”

You have a new record out on Phil’s label Housecore in the States, so you’re obviously pretty close. How far back do you go?

“We went to school together back in seventh or eighth grade. We didn’t know each other that well, I knew him as the glammed out guy with pouffy hair.” Phil was the glam guy?!

“Yeah, before Pantera he was in a band called Razor White. There was this whole scene in New Orleans with bands who looked like that and did cover songs. He was a great singer, that was what he did best and that’s how he was chosen to be in Pantera.”

It was from the world of glam metal and wonderfully produced sounds that led to the birth of sludge. A genre completely antithetical to those polished vibes. What was 1988 like to be a metal fan and producing music?

“I grew up as a punk rock kid, but I always liked metal too. I once got beaten up for wearing an Iron Maiden jacket and having a shaved head. I used to think, ‘What if there was a band like Black Sabbath but the guy didn’t sing, it was more heavy punk sounding.’ People would laugh and think that it couldn’t happen. Black Flag influenced me a lot, they put out My War and side two was super slow.”

What is it about Black Flag?

“I love the band and I love that era. I wasn’t much of a Rollins fan but that Damaged album is really good. They were one of those bands that changed everything. I like bands that throw a wrench into the mix and change the whole scene up. They were heavy and their shows would always end in riots – it was just chaos and it excited me as a kid. It still does.”

Henry Rollins is one of the most intimidating frontmen we’ve ever seen. You never know when he might just jump off the stage and punch you.

“Yeah, but there were singers before him. Dez was awesome, Keith Morris was pretty good. There was a guy called Ron who sang on the Jealous Again record, and they were better to me than Rollins. He was okay, but I liked the earlier stuff.”

But equally as confrontational.

“That’s what that band was all about – confrontation. They were in your face from the first note, it was a force.”

Is that something you try and bring into your own shows?

“We like to have that excitement and the atmosphere of violence, like something could go wrong at any minute or someone could get hurt. That’s what rock ‘n’ roll is meant to be, it’s not meant to be safe. We definitely brought that extremeness to our music.”

Where do you come from lyrically and with your vocal style?

“On the new record you can understand a lot of what I’m saying. Me and Phil were in a band with Hank 3 called Arson Anthem that was a fast hardcore band and I actually pronounced a lot of my words with Phil’s help. He’d tell me if things would sound better a different way. On the new Eyehategod record you can tell it’s my vocals but you can actually understand the lyrics.

For inspiration it’s all from personal stuff like drugs, love, hate, misery, life, bus fumes, walking down the street with nowhere to go, being homeless at times… things like that you feel deep down.”

Any plans with Corrections House?

“I’m meeting them at Roadburn. It’s me, Scott Kelly from Neurosis, Bruce Lamont from Yakuza, and Sanford Parker from Nokmystium and Twilight. Sanford actually mixed the new Eyehategod record. We’re an experimental type thing, some of it is industrial, there’s some spoken-word stuff in there. Scott does his acoustic stuff too, meshed into one with some noise. It’s a strange band.”

_Eyehategod is out 26 May on Century Media in Europe and on 27 May on Housecore in the US. _