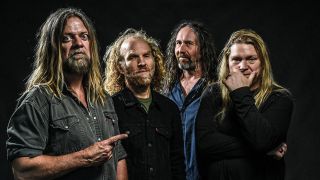 How many times have you seen bands get back together, some bunch of old dudes, and they make a record after so many years and it’s like, ‘Damn it, so close!’?”

When it transpired that plans were afoot to reunite the classic Corrosion Of Conformity line-up that made 1994’s major label breakthrough, Deliverance, it felt like a big deal to a lot of people – frontman Pepper Keenan included.

Speaking to Hammer as the band prepare to release their long-awaited 10th album, No Cross No Crown, Pepper recalls the moment late in 2014 when, after a decade of focusing on playing guitar with Down, he took a leap of faith and reconvened with founder members Woody Weatherman (guitar), Mike Dean (bass) and Reed Mullin (drums) in a small practice room in Raleigh, North Carolina.

Nine years after the release of his supposedly final album with the band, In The Arms Of God, it was time to see if the old chemistry was still there.

“I think at this point in the game I’ve learned to not close any doors, but it has to be done right,” he says of the decision to rejoin his former comrades. “It was always a matter of when we all had downtime, so we could do it for real, and not just some money-grab thing.

"Eventually we all showed up at this little place we used to call the Wig Shoppe, in Raleigh, and honestly, I hadn’t sung in 10 years! It was a whole new ball game and a real challenge. But it was just like back in the day, like a weird fuckin’ time warp. The next thing I knew we went back on the road for nearly two years. To be honest, I think we fucked up, because we kept touring but we didn’t have a new record.”

Despite getting great reviews for their reunion shows, COC have clearly spent much of the last two years itching to get back into the studio. As Pepper avows, the band’s ethos has always revolved around the thrill of making new music, but being stuck on a bus somewhere in Canada wasn’t proving terribly conducive to the creative process. Luckily, fate intervened.

“We had riffs and we jammed at soundcheck, but anyone who says they write songs on the road is full of crap!” he roars. “We can’t just spit something out. People kept asking us back so the gigs kept coming, but then we signed with Nuclear Blast. They came poking around and that made everything a lot easier. I was very happy that we didn’t have to spend years selling ourselves out to get a record deal. They just came to us and said, ‘Hey, we want a record!’ OK, cool, you know? Let’s make a record. It was pretty simple.”

From the fiery opening riffs of The Luddite to the glowering, pitch-black swamp metal of the closing A Quest To Believe, the new COC album certainly doesn’t sound like a bunch of old dudes reliving past glories. Somehow the band’s original punk rock ethos and shared chemistry have kept their music vibrant, vital and wonderfully snotty, even as they all settle into something approaching respectable middle age.

Full of angry moments that seem to jab, albeit obliquely, at the folly of religion and American society’s current ills, it’s a balls- out and bluesy heavy metal album with a blazing fire in its belly. As far as Pepper Keenan is concerned, kicking this much ass just comes naturally when you’ve been doing it for this long.

“It’s not rocket science. We’re music fans. We started with a blank slate – we had nothing – and then we got the title No Cross No Crown and everything flowed from there,” he shrugs. “It started to write itself. We didn’t try to control it too much. You’re just an artist with a bunch of paints and you can’t predict what the colours will look like at the end. It’s just art. This is what we think is cool, you know?”

The story of Corrosion Of Conformity is almost certainly unique in metal, primarily because they have changed heavy music irrevocably on at least two separate occasions. The band’s first, three-piece line-up of Woody Weatherman, Mike Dean and Reed Mullin emerged in the early 80s as one of the most revered and important bands in the nascent American hardcore scene, peaking with 1985’s classic Animosity album.

By the dawn of the 90s, they had transformed into something else entirely: 1991’s Blind album embraced groove metal and hard rock sensibilities and gave Pepper his debut as vocalist on COC’s breakthrough single, Vote With A Bullet.

With Pepper installed as frontman, 1994’s Deliverance and its 1996 follow-up Wiseblood established COC as leading lights in the then-flourishing stoner rock and doom scenes, re-injecting some much-needed Iommi-saluting heft into mainstream metal. Pepper’s last hurrah with COC came in 2005 with the widely acclaimed In The Arms Of God, before he stepped away from the mic and threw himself into Down’s burgeoning career.

Meanwhile, the original trio of Woody, Mike and Reed got back together to form yet another incarnation, making two angular, brutal albums that sat somewhere between COC’s early years and the warped thrash of Voivod. Fast-forward to 2018, and the release of No Cross No Crown ushers in yet another era and, perhaps, the greatest one yet for these iconic contrarians.

“Yeah I can’t think of any other bands like us!” chuckles Pepper. “Maybe Pink Floyd? There are a couple of distinct, different versions of that band. Maybe [legendary Latino boy band] Menudo or something? I don’t know. It’s just the way things work out with COC. It wasn’t weird seeing them do stuff without me. They were a three-piece before I joined, you know?

"For us, it was never a complicated thing. I guess I could’ve started Pepper Keenan’s Corrosion Of Conformity, you know, the kind of shit that old rockers do, ha ha! But there was never any issue between us and this was always going to happen someday. It’s worked out real good.