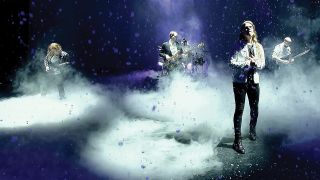 The band have released a behind the scenes video that gives an inside look into the creation of Entropy's music video.

Drummer Ashley Doodkorte says: “Allow Joseph from Dark Spirit Photography to take you behind the scenes on our most elaborate music video production yet!

"The video was shot at St Mary’s in Perth, where Scott teaches, and after heaps of experimenting, we managed to film Einar in Norway and incorporate this into the video. We told some people he just Skype'd in, but I don’t think they believed us somehow!

"Joseph took our album artwork, and manipulated and animated it to create some abstract visuals for us to project larger than life behind us. Shooting the clip for Entropy was  such an amazing experience; it gave us a little taste of what being on stage at Eurovision could be like! We’d love to have production like that for every show."

Entropy is taken from their upcoming seventh album Colours In The Sun, which is out for release on November 1 via Season Of Mist.

It is the fourth track to be released from the upcoming record and follows the previous launched videos for Brightstar, lead single Colours and Water Over The Bridge.