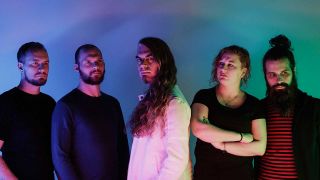 The new track is taken from their forthcoming seventh studio album Colours In The Sun. The follow-up to the proggy outfit’s 2017 record Ghost Mile will see its release on November 1 via Season Of Mist.

Entropy is the fourth track to be released from the upcoming record and follows the previous launched videos for Brightstar, lead single Colours and Water Over The Bridge.

Speaking about the new track, vocalist Danny says: "Touring with Leprous around Europe and Australia, we became good friends with the guys - they are fantastic musicians and fantastic human beings.

"Einar has one of the most unique styles and grasp for vocal melodies in progressive music today and it would have been remiss of me not to ask him to guest on this track.

"I gave Einar free reign to do what he wanted - a risky move usually, but not with Mr Solberg. The end result is stunning - a truly catchy Voyager track with some soaring Solberg - it doesn't get better than that!"

Einar also comments: “I was super happy to participate on Entropy with my good friends from Voyager. Very groovy stuff! Danny gave me some guidelines for vocals but I didn’t even listen to them!"

Danny chimes in again and says: "I can confirm that Einar definitely didn't listen to the reference track". #surprisevocals

Check out the track below:

Voyager's latest album Colours In The Sun is available to pre-order now.