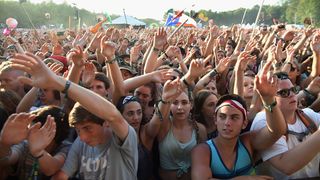 The BBC has launched a guide offering advice to gig-goers on how to prevent tinnitus and protect their hearing.

The BBC iWonder guide – titled How can I stop gigs and festivals ruining my hearing? – is available now.

It’s backed by the British Tinnitus Association (BTA), which describes tinnitus as “the perception of sound in the absence of any corresponding external sound.

“This noise may be heard in one ear, in both ears or in the middle of the head or it may be difficult to pinpoint its exact location. The noise may be low, medium or high‑pitched. There may be a single noise or two or more components.

“The noise may be continuous or it may come and go.”

The iWonder guide is presented by BBC presenter Anne Savage, who suffers from tinnitus. She says: “I have to face the fact that I will never hear silence again.

“The thing is I could have taken simple steps and still enjoyed going to festivals and clubs and listening to music.

Emily Broomhead, the BTA’s lead on Plug’em, says: “We’re so pleased that the BBC has created this guide which reinforces the message that protecting hearing is essential.

“We hope it encourages more people to be aware of their hearing and use earplugs at festivals, gigs and clubs.”

Earlier this year, AC/DC frontman Brian Johnson was ordered to stop touring or risk going deaf. In 2015, a study by the World Health Organisation warned that 28 seconds at a rock concert could damage hearing.