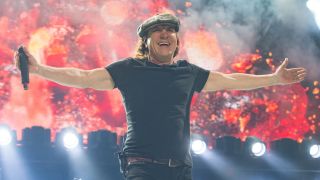 AC/DC mainman Brian Johnson has checked in with an update after meeting with hearing technology expert Stephen Ambrose.

Johnson was forced to stop touring with the band earlier this year under the threat of permanent deafness. But after a social media campaign was launched, Ambrose – head of in-ear monitor makers Asius Technologies – met with Johnson to see if he could help the singer.

And the frontman reports he’s “moved and amazed” by the technology Ambrose is pioneering.

Johnson says via Ambrose’s Facebook page: “It works. It just totally works and you can’t argue with that. I was really moved and amazed to be able to hear music again like I haven’t heard for several years now.

“I can’t wait for it to be miniturised so I can use it in every situation from normal communication, going out to noisy restaurants, to performing live music on stage.”

AC/DC hired Guns N’ Roses frontman Axl Rose to complete their Rock Or Bust tour and recently rescheduled 10 dates in the US which will take place in August.

Since teaming up with Rose, AC/DC have been performing tracks they had played only rarely in recent years, including Riff Raff, Touch Too Much and If You Want Blood (You’ve Got It).