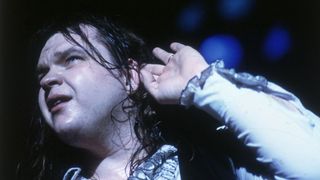 Ah, that post-gig feeling. You can’t beat it. Hair like wet straw. Armpits like the Sarlacc from Star Wars. Ears ringing with an incessant wolf-whistle, like you’re Lita Ford walking past a building site. Stumbling out of a venue semi-deafened is a key part of the rock‘n’roll ritual, and also a point of pride. As we know, real men play on ‘10’ (or one louder). If you don’t like it earth-crust-crackingly loud, then put on a dicky bow and fuck off to Glyndebourne.

But whisper it: our passion for high-decibel rock‘n’roll could be setting us up for some major hearing problems down the line. As a rock hack, I’m used to screaming down the phone at old stagers who long since shagged their eardrums. Pete Townshend, Ozzy Osbourne, Jeff Beck, Eric Clapton, Neil Young: all have suffered the fallout from a life in the trenches. And this month, the dangers were brought into sharp focus by the bombshell that Brian Johnson might have to split from AC/DC or suffer total hearing blackout. Seems rock‘n’roll might be noise pollution after all…

And don’t think you’re safe in the pit. “European regulations say that we can work safely in under 85 decibels for eight hours every day,” explains Paul Checkley, Clinical Director of Musicians Hearing Services, which works with bands including The Who and Coldplay. “But the way a decibel works is, a 3dB increase results in a doubling of loudness. So if we move from 85dB up to 88dB, the loudness actually doubles and the exposure time halves.

“Now, on average,” he continues, “a rock concert is about 110 decibels. That’s about like a plane taking off. It’s very loud. And with hyperactivity – that means very loud sounds – we see damage to the little neurons in the inner ear, which are responsible for transmitting the sound.”

Hence the dog-whistle on the tube home. Checkley nods: “In the short-term, we experience something called temporary threshold shift. That’s when you leave a concert and you get a slight ringing in your ears and a dullness to your hearing. Because those neurons have been damaged by the exposure and they’ve stopped working so well. But after 24 or 48 hours, those cells will repair themselves and the hearing will come back to normal.”

Terminator-style cell regeneration sounds good. So why can’t we rock on with impunity? “If there’s continual temporary threshhold shift,” explains Checkley, “then that threshhold shift becomes permanent. So we’re looking at the risk of permanent loss. Once those neurons have been damaged, that’s it, the hearing has gone. It never repairs itself.

“The other risk,” he continues, “is tinnitus. Something like 80 per cent of people who have hearing loss will also have tinnitus. And tinnitus is now thought to be a compensatory signal produced by the auditory system. The ears become damaged, and they’re not sending messages to the brain as they should, and the brain says, ‘Hang on, I’m not hearing anything’. So we then start hearing a compensatory signal. Usually, people will describe tinnitus as a kind of rushing sound or hissing noise. And there’s not a great deal that can be done. With tinnitus, that’s it. Usually, it never goes away.”

Blimey. In the absence of a cure, then, let’s talk prevention. There’s the no-brainer stuff, says Checkley, like spending at least some of the gig stood at a distance from the speakers, rather than sticking your lugs onto the cone of Slash’s Marshall stack. Then there’s the tactic of giving yourself recovery time: “If you’re going to [gigs] every night, then you’re not giving yourself a chance for those temporarily damaged cells to repair themselves.”

But the smartest tactic, Checkley explains, is to make like the pros and use ear protection. At this suggestion, we can hear a thousand fists being put through monitor screens. For the hardcore, the act of filling our ears with wadding marks us out as a lightweight and a thumbsucker, and renders the apocalyptic roar of Black Sabbath at full-throttle to a mouse-fart.

Well, maybe. But as Checkley reminds us, if we don’t look after our ears, pretty soon, we won’t be able to enjoy rock‘n’roll at all. “We hear all sorts of things from musicians,” he sighs. “Like, ‘Oh I don’t care if I can’t hear when I’m fifty’, or ‘I just like my music loud’, and this sort of thing. It’s usually not until people actually develop a problem that they think, ‘Oh, wow, yeah, perhaps I should have protected my ears’. The problem is, once something happens, by that time, unfortunately, it’s too late. So the important thing is making sure that people are aware of the risk, prior to the damage…”

Find out more at www.musicianshearingservices.co.uk