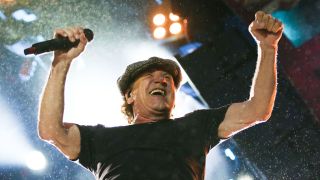 A leading hearing technology boss reports that AC/DC’s Brian Johnson has been in touch with him, after a social media campaign was launched to make a meeting happen.

Johnson was forced to stop touring earlier this year under the threat of permanent deafness – but Stephen Ambrose, head of in-ear monitor makers Asius Technologies, vowed he could help the veteran singer return to the stage.

Now Ambrose says the pair will discuss the situation next Tuesday (May 17). He reports: “Due to everyone’s tremendous support, Brian and I spoke yesterday. What a gracious man. He and his wife invited me to visit them next week.

“If anyone deserves to benefit from my research it’s Brian, who’s been giving incomparable performances for years, despite increased hearing loss.

“I’m going to do my utmost to see if our breakthroughs can help him. If I’m successful I’m sure Brian will let everyone know.

“Please pray for our success next week.”

AC/DC hired Guns N’ Roses frontman Axl Rose to complete their Rock Or Bust tour, which started up again at the weekend, but their plans beyond those commitments are unknown. Guitarist Angus Young has insisted Johnson wasn’t fired.

Meanwhile, the statue created to commemorate late AC/DC frontman Bon Scott has become the most popular tourist attraction in his home town of Kirriemuir, Scotland, according to TripAdvisor.

The statue was only unveiled 10 days ago – but it’s already the number-one thing to do in the town, ahead of visiting the birthplace of Peter Pan creator JM Barrie, local castles, museums and beauty spots.