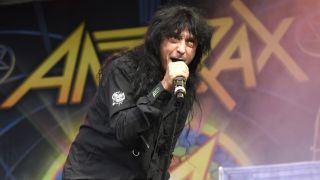 Anthrax have announced a 2017 UK tour on which they will perform 1987 album Among The Living in its entirety.

As well as playing Among The Living in full, Anthrax will perform a string of fan favourites on the eight dates, which kick off in Birmingham on February 9.

It marks the band’s first full UK headline tour in more than 10 years.

Mainman Scott Ian says: “Finally! We’ve been looking forward to headlining in the UK for so long. We have a killer set planned – new stuff, old favourites, deep tracks and Among The Living front to back.

“You’d better start getting in shape now for the epic war dance. See you soon my friends.”

The shows will mark the 30-year anniversary of Among The Living and will see British metal outfit The Raven Age onboard as support.

Anthrax released their latest album For All Kings earlier this year.