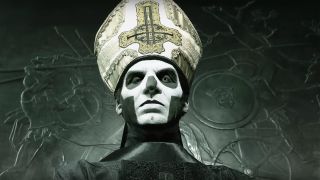 End is nigh: Papa Emeritus III

Ghost have released a video in which cult leader Sister Imperator tells them to prepare for the arrival of Papa Emeritus IV.

Each Ghost album has been fronted by a “new incarnation” of the frontman, suggesting that the follow-up to third title Meliora, expected next year, will include the installation of a fourth leader.

In the latest video, entitled The Summoning VII: Believe This, Sister Imperator says: “Are you ready to start anew? The new coming is about to begin. I give you another chance at transformation – but you must beg.”

Ghost released their Popestar EP in September to bridge the gap between Meliora and their next full-length work.

A Ghoul recently said of the material to come: “it’s a continuation of Meliora, but it’s sort of a response. I’ve used the word ‘pre-acopalyptic’ on Meliora. It’s sort of the height of civilisation, and, obviously, there has to be an end to that.

“If there was an absence of a God, there might be a return of a deity, which usually comes in horrible form. So it will be a darker album.”

Who are Ghost and what do they want?