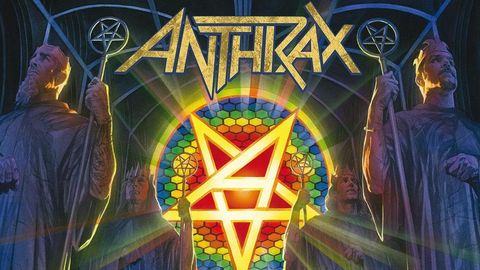 When Joey Belladonna finally rejoined the other members of Anthrax after a two-decade studio break from the band, some of us dared to hope for a return to the classic thrash stylings of 1985’s Spreading The Disease or 1987’s Among The Living.

Instead, 2011’s Worship Music continued to pump the more melodic songwriting muscles Anthrax had discovered on 1993’s Sound Of White Noise while drawing harder than ever on their trad metal roots. The result was a worthy return with some very strong songs, but one that ploughed a more simplistic road, steering away from the full-on thrash their hi-topped fans had been hoping for.

To be fair, Anthrax started out as a heavy metal band, as can be heard on their 1984 debut Fistful Of Metal. Having fired themselves out of that cannon, they sailed through the flaming hoop of 80s thrash metal, through hardcore, through the dark days of alt-rock, and now find themselves back in Metalville, standing on the shoulders of giants. Excitingly, For All Kings plays like the band’s overwhelmingly successful attempt, consciously or otherwise, to consolidate and reconcile their past and present – often within the very same song.

The opening You Gotta Believe signals that this is a more spirited and turbo-fuelled affair, being uptempo with a great riff and a killer chorus packing a hint of shoutalong NYC hardcore. Monster At The End pulls back to the kind of rolling tempo we’ve come to expect from post-thrash Anthrax, but is again more urgent, spikier and downright riffy. The joyously pounding Evil Twin is angrier than we’ve heard Anthrax in a while. That’s the main difference between this album and its predecessor: the added emphasis on intensity, without sacrificing any of the rich hooks. Indeed, Joey Belladonna sounds better than ever and really gets to show off on this record. Brilliantly, at the start of the title-track he sounds almost exactly like one of the band’s heroes, Ronnie James Dio. This song is one of the better examples of Anthrax’s new ‘consolidated’ approach, coming over like Dio singing thrash. Hooray!

The more melodic songs, like Breathing Lightning or Suzerain, are catchier than those on Worship Music, while benefiting from that extra oomph. Even the sprawling, eight-minute epic Blood Eagle Wings, builds from its opening Judas Priest chords to deliver a dynamic mid-section. Defend Avenge boasts a gnarly riff and a barked refrain that would’ve been at home on any 80s Anthrax album, while the wonderful _All Of Them _Thieves maintains the aggressively staccato assault. And like a love letter to their patient speed-loving fans, closer Zero Tolerance is proper thrash metal. The damn thing hurtles along at a pace comparable to 1985’s Gung Ho, while spraying contemptuous venom over hateful extremists of all stripes. Double hooray!

For All Kings comes within moshing distance of being an all-time great. Remember the towering monster at the end of John Carpenter’s 1982 horror classic The Thing, composed of all its past selves and howling like a pack of wolves? That’s Anthrax in 2016. Enjoy.

FOR ALL KINGS SEEMS TO PULL VARIOUS STYLISTIC STRANDS TOGETHER FROM ANTHRAX’S CAREER. DID YOU INTEND FOR IT TO HAVE SOMETHING FOR EVERYONE?

“We didn’t actually think of it in that way. We just always try to write the best songs possible. If you do that, the rest will take care of itself.”

WHY THE FIVE-YEAR GAP BETWEEN WORSHIP MUSIC AND THIS ALBUM?

“It’s all down to touring. We played well over 300 shows across the world for Worship Music, so we were on the road for a lot of that five-year gap between albums.”

HOW TRUE IS IT TO SAY THAT WORSHIP MUSIC WAS ABOUT ESTABLISHING THAT YOU COULD RECORD WITH JOEY BELLADONNA AGAIN, WHEREAS FOR ALL KINGS HAS BEEN MORE ABOUT MOVING FORWARDS?

“I think Worship Music did a lot of great things for Anthrax and it gave us a lot of momentum once more. It’s been a great vibe going into For All Kings – we are still a very hungry band looking forward to the future.”

WHICH OF THESE NEW SONGS ARE YOU MOST LOOKING FORWARD TO PLAYING LIVE, AND WHY?

“I’d play any one of the tracks live. That’s how much I’m into For All Kings!”

TO WHAT EXTENT DO YOU FEEL PRESSURE FROM AMONG THE FANS TO RE-EMBRACE THE CRUNCHY THRASH OF 1987?

“There’s no point trying to recreate the past, it can’t be done. We just move forward and write the best songs we can!”