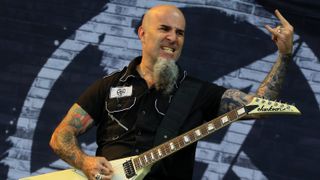 As the man who helped shape thrash and bring rap-rock to a generation of metal fans, we knew Scott Ian would have a few things to say about life, the universe and everything. From his undying passion for heavy music to his appreciation for the people that keep Anthrax alive, he is a true legend and gentleman of our world. These are his philosophies on existence.

“On tour, I really don’t listen to music, because I’m surrounded by it. So generally from the time I get offstage ’til the time I get back onstage, I’m probably not listening to anything. At home, it’s a different story – music is a constant. And it’s generally playlists that me and my wife have made, or going into Spotify and putting on Thin Lzzy Radio, and just letting them do all the work. I listen to everything from Thin Lzzy, to The Allman Brothers, to Iron Maiden, to Bonnie Raitt, to Kiss, to Slayer, to Mercyful Fate – it’s all over the map. But if I had to pick one favourite band, it would be AC/DC with Bon.”

“I stay out of it. I gave up a long time ago on it. I don’t believe in the system – I’m speaking strictly about America, because I don’t know anyone else’s. I don’t back either candidate in this election, although I will not be voting for Donald Trump – I will go on record and say that. I hate both choices, honestly. I think the country deserves better, and it’s sad that this is where we’re at in 2016 – that the political process has become a fucking reality show. I don’t spend a moment of my time thinking about Trump or worrying about him. The fact that so many people do spend time thinking about it, talking about it, and wasting time on it is a bit disturbing, actually. The whole thing could have gone away a long time ago, but people gave it life.”

“Again, it’s not something I’m involved with at all. I’m Jewish, but we always had a Christmas tree, so I didn’t grow up in a very religious household. I don’t even call myself an atheist, or agnostic, or anything like that. It’s just not a part of my life at all. Did I go to a synagogue growing up? Hell, god no. A lot of my friends had to go to Hebrew school, and when my mom asked, ‘Do you wanna go to Hebrew school?’ I was like, ‘Are you fucking crazy? More school after regular school? No, I wanna go ride my skateboard and play guitar – that’s what I’m gonna do.‘”

“I’m a 70s, Silver Age comicbook guy, Marvel and DC both. That was my heyday when it came to comics. I would say up until the end of the 80s, I was still heavily into comics. I don’t know what changed – I changed, I guess. But at some point in the 90s, I stopped following it. Now, I couldn’t tell you the last time I went to a shop and bought comics. I have a collection in storage. I can’t say I’m even attached to it, because I haven’t seen it in years. Shit changes in your life. You only have x amount of time in a day to do shit. When when I’m home, I’d rather just be playing with my son.”

“It’s good, I guess. The recovery time from headbanging certainly is not as easy as it used to be. And my back. Basically, 30-odd years of touring and wearing a guitar has taken its toll on my left shoulder, and I have to see a physical therapist when I’m at home, because it’s a source of constant annoyance. The pain that I had last year isn’t as bad as it was – I had a lot of pain and then I did about six months of physical therapy. But the problem is, I’m still touring. If I was done, then the pain would go away. But I go back out on tour and it exacerbates it and it gets shitty. It’s an-on-the-job related injury. I don’t know how Slash does it. If someone wants to turn me into a cyborg, I’m in.”

“Having a child was the first time I ever thought about my own mortality. Thinking about how much time I have left, and how many years could be quality years. In that first year of his life, I thought about it quite a bit. And the shitty planet that we live on, and all the crappy things that go on, and all the travelling we have to do as a band certainly ties into that, too. With the amount of airports we frequent on a constant basis, and all the flying we do, and the cities we’re in. You just never know, right? But I’m not going to stay home yet. We’re not done with what we’re doing in Anthrax. I know I want March Of The S.O.D. [by Scott’s former band, Stormtroopers Of Death] played at my funeral, done in the S.O.D. way of Ballad Of Scott Ian, where it’ll play the riff, and then someone will have to say, ‘You’re dead’ at the end of it. Because if I can’t take the piss out of myself, then what right do I have to take the piss out of anyone else?”

“I still get the same kick in the ass when I listen to Bonded By Blood from Exodus, or Kill ‘Em All, Hell Awaits, Reign In Blood ­­– any of that stuff. I still get the same charge that I did in 1985. I know it’s a cliché, but it really is in my blood. I’ve been doing it since 1981. It’s the reason why I’m here now. A vampire gets turned by its maker, and it’s like I was bitten by this thing in 1980, and it’s never, ever gone away. It’s in my blood to do this. I’ll always feel the same way about that stuff. And it’s not even that it’s thrash, but listening to early Maiden and Motorhead, and Judas Priest and AC/DC, and all the stuff I grew up with. It all makes me feel exactly the same now as it did when I was a kid. Exactly the same. I headbang the same now to [Iron Maiden’s] Killers as I did in 1981.”

“If it wasn’t for our audience around the world that connects with what we do, then we wouldn’t be a band. The energy level of the fans of this type of music has never changed. I know, because I’m a fan of it. There’s a thing that happens in this genre – if I’m walking down the street, and someone sees me and recognises me, they’re going to scream my name or the name of my band really loud. And that only happens in heavy metal and maybe hard rock. It doesn’t happen in jazz or pop. Adele fans aren’t going to be like, ‘ADELE’! It only really happens in this type of music. Like I was saying before, it’s in your blood. Once this infects you, it never goes away.”