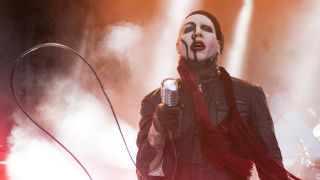 In our regular feature Thinking Out Loud, we find out what’s going on in the minds of the great and good. This week, we poke around the brain of the God of Fuck himself, Marilyn Manson.

But what the hell does Scooby-Doo have to do with one of rock’s most controversial stars?

“When I speak, people listen. That gives me a power over them. I quickly came to realise that being a rock star grants me the same power over people as it would if I were the President. You’re empowered by attention. It goes all the way back to Roman times and Caesar. People give you power, but it’s what you do with it that counts.”

“When I was seven or eight, I was playing with my Scooby-Doo and Daphne toys, and had a strange feeling. It was my first sexual arousal. Now I feel that all girls with red hair are of the devil.”

“I trained to be a sniper at age 7. I have good aim. But I was afraid to go and get drafted into the army, because I didn’t want to get a haircut…I’m pretty bummed that my mullet kept me from a free kill-fest.”

“What I learnt, when I was bored, when I went to a mental hospital, to rehab… were the simple rules. Drink when you’re in a good mood, not when you’re in a bad mood. And don’t smoke crack, because it makes you poor. Cocaine also – it actually makes you poor. And heroin you’ll die, and Methadone makes your teeth look terrible. I’ve never smoked meth or done heroin in my life, because I’ve had too many of my friends die of that shit. That was based on simple observation, not judgement.”

“Sons Of Anarchy is my dad’s favourite show, so I tried to get on the show just to trick him into coming to Los Angeles, to be on the set. Once I was working on it I changed my lifestyle completely. I flipped it upside-down. I had to wake up at 6 am. So people were saying: ‘Who the fuck are you? You’re up at noon? What are you doing?’ I said: ‘I’m doing my job.’”

“I get shocked by every single person I meet. No one’s stabbed me or shot me or anything like that, but I’m always shocked at how affected people are by the things that I’ve made and how much it means to them. It’s never really worn off, I’ve never become jaded by it. It just makes me surprised that the only way I can connect with people is from a distance, through art.”

“The media held me responsible for basically every act of violence that happened in America, no matter what. So what should I do? Stand there and let them fuck me over or turn around and smash their teeth in? I decided that Iʼm going to do the latter. But Iʼm going to do it with Holy Wood and Iʼm going to do it so hard that theyʼll wish theyʼve never been born. I hope that this is Americaʼs worst nightmare and I hope that we can disrupt the regimented lifestyle people have set out for themselves. Thatʼs what rockʼnʼroll was intended to be and thatʼs what I am and thatʼs what Iʼm always going to be and the day that Iʼm not is the day that I quit.”

“I’m the type of person that stands by their morals. I have a set of rules, if someone tries to fuck with what I believe in, what I love. You have to be willing to die for what you do. Do I want to die? No. Am I easy to kill? No. If you fuck with me will you get hurt? Probably. I protect what I care about. And that’s a man who stands by his morals. And those morals are dictated by me, and not by some bogus religion, or some egos, or some people I don’t know.”

“I wonder sometimes if I’ve outgrown my spotlight. Someone asked me a long time ago, ‘Are you worried your image will overshadow your music?’ No, I’m worried my music will overshadow my image.”

“While we recorded Antichrist Superstar in New Orleans, we spent a long time experimenting with various extremes of both the natural and supernatural: black magic, drugs, computers and pain threshold experiences all played their part. I consider the record to be a ritual to bring about the apocalypse. Each time someone plays the record, it takes them one step further away from God and one step nearer to becoming an individual. In Christianity’s eyes, a nation of individuals is the apocalypse, because they will no longer have moral control.”

“Do you want to know why they hate me so much? They call me a junkie and a Satanist. But really I’m much, much worse than any of that. I’m everything they’re afraid of. Everything they hate, everything they try to hide, and a lot more besides. I speak my mind and I show people what’s out there in reality. They’re using me as the bogeyman, but I’m reflecting it all back like a mirror.”