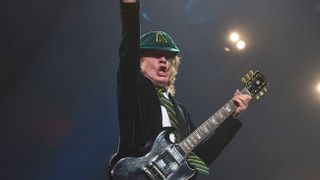 Angus Young has thanked AC/DC fans for their support as the band’s Rock Or Bust tour drew to a close.

In a video message posted on the band’s Facebook page, Young describes the tour as “one big adventure with its highs and its lows.”

Guns N’ Roses frontman Axl Rose filled in for Brian Johnson for a large part of the tour after Johnson was ordered to stop touring or risk going deaf.

Young says: “I want to thank everyone who had come along with us on this Rock Or Bust tour. It’s certainly been one big adventure with its highs and its lows.

“I want to thank everyone who has contributed to it and put in a lot of hard work and effort to make it happen.

“I also want to thank all the people who came out to see us and brought all that magic atmosphere.”

After the band’s last Rock Or Bust show, which took place in Philadelphia last night (September 20), bassist Cliff Williams confirmed he is retiring, having previously said he planned to quit after the tour.

A video showing Angus Young saying goodbye to Williams after last night’s performance or For Those About To Rock (We Salute You) can also be viewed below.