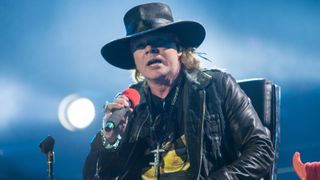 Apologies for getting in touch on such a public forum, but as you’re presently jet-setting around Europe we weren’t sure of the best way to get hold of you: that time we camped outside your home in LA ended badly for all concerned, and the restraining order also applies to emails, texts, phone calls and even Tinder messaging, apparently, so…

Anyway, it’s fair to say that we haven’t always seen eye-to-eye in the post-Use Your Illusion years. This isn’t the time to point fingers and apportion blame, but for the record, it was you not us. Those riots, those tantrums, the whole Chinese Democracy debacle, those times children (and indeed grown adults) walked out of your gigs in tears because you were enjoying a second portion of pie three hours after stage-time, that shit is all on you buddy. But in fairness, we’ve been no angels either. The ‘Keith Lemon’ memes, the sniggering at your corn-rows, the #TeamSlashIzzyDuffSteven hashtags… all very childish and unbecoming. And when we heard the rumours that you were set to replace Beano in AC/DC… well, let’s just say our reaction made the hysterical sweary bit from Get In The Ring sound like Katherine Jenkins singing All Things Bright and Beautiful. But that’s all in the past.

Full disclosure: on Saturday night, as we waited with bated breath to see how your virgin bow with AC/DC might turn out, we felt a little like vultures circling above carrion. We were expecting a car crash, a train wreck, an omnishambolic clusterfuck… and yet another opportunity to put the boot in with the rest of the professionally-indignant/personally-offended, puce-faced culture vigilantes. What we weren’t expecting was for you to turn up on time (well… pretty much), all smiles and sweet talk, and absolutely nail it, like a fucking boss.

We understand that the official reason given for you sitting down onstage at the Passeio Maritimo de Algés on Saturday night was because of a broken metatarsal in your left foot. Get well soon, and all that, if that’s indeed the case. Because from where we were watching, we thought you might need that chair purely because you’re toting around THE BIGGEST BALLS IN ROCK! Who else would have the nerve, the chutzpah, the sheer cojones to face down one of the most fiercely partisan audiences in rock at their most feisty and belligerent and end up charming the entire stadium’s knickers off? The cheeky mention of ‘Portuguese thighs’ in You Shook Me All Night Long? Nice. That moment where you stopped the “Axl! Axl!” chant and started up an “Angus! Angus!” roar instead? Well played brother, well played. We always knew you could pull off the vocals – no, honestly, we did - but truthfully it’s not often we’ve considered employing the words ‘humility’, ‘class’ and ‘dignity’ when considering your actions onstage, and this weekend we were genuinely impressed. And perhaps even a little embarrassed by our own readiness to shoulder pitchforks with the mob in the past few weeks.

So hey, please consider this an apology Axl. We’re sorry for doubting you. There was us thinking that this was all about ego and pay cheques, when in fact you’ve proven yourself to be rock ‘n’ roll’s own Good Samaritan, thoughtfully guiding a weary OAP across the highway from Hell (if you’ll excuse the clumsy mixed metaphors and misappropriated song title). Fair fucks to you, we didn’t see this coming at all. Good job, man, keep it up. From those about to rock, we salute you.

The (Rock) World and His Wife x

For more on AC/DC, and Axl, check out our bulging TeamRock archives…

Axl Rose: I'm trying to do it justice for the AC/DC fans

The 10 Songs AXL/DC Should Play… But Probably Won’t