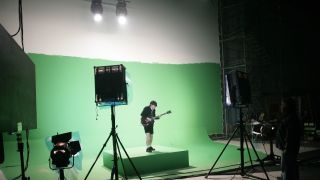 AC/DC were never in it for the glamour, and you get the distinct impression that making videos may not have been their favourite thing. Which is probably why so many of the band’s promo videos are simple live performances. In the search for something more, we’ve dug out 10 of the band’s best videos that offer that little bit extra…

Filmed on a piece of waste ground, this funny little relic features Bon, Phil and Angus wearing some admirably home-made cons uniforms, and Malc and Mark togged up in some old-fashioned jailers’ uniforms. There’s some hammy old acting out of the song’s lyrics, some hilarious explosions and Bon’s bare chest working overtime. But it would be hard-hearted soul who didn’t enjoy this enthusiastic promo.

A typically tongue-in-cheek lyric receives a suitably tongue-in-cheek video treatment. The band – featuring new guitarist Stevie Young and stand-in drummer Bob Richards – rock out as usual, while various ball-playing activities are included along the way. We never knew horses could do that kind of thing, by the way! Scantily clad ladies also feature, and while it’s not what you’d call ‘high concept’, when were AC/DC ever about that?

Memorable for the cast of Angus clones who follow the wee man’s lead and boogie their way through this video to great effect. The band perform on a soundstage surrounded by futuristic scaffolding on which the army of Anguses strut their stuff in homage to the man himself. It was a trick DC would revisit on 1990’s Are You Ready. Inspired, the original Angus works harder than ever here to keep the tune motoring along in a silly but enjoyable celluloid experiment.

A groovy little video sees the band in a Humvee taking a wrong turn down a dead-end American street, then getting stuck. What’s the solution? Set up and play some rock ‘n’ roll, of course. Brian Johnson delivers his vocals from the sidewalk, curious bystanders get very excited when they realise what’s going on, and the band look like they’re actually having a whole heap of fun.

This fantastic early promo features the group on a flat bed truck making its way around Melbourne at speeds not exceeding 10 mph, much to the general bemusement of all but a few fans. Angus looks about 12, Malcolm’s got zits, bassist Mark Evans sports a wicked set of flares, Phil does what Phil does best, and Bon mugs it up for a furious bagpipe solo alongside the ‘Rats of Tobruk’ pipe band, complete with kilts. A brilliant song and a brilliant period piece.

Six years after the tune was originally released on 1980’s Back In Black album, one of the ‘DC’s most enduring numbers got a comic video makeover. Black and white footage sees Beano scrubbing up in a tin bath, before taking to the streets of Huddersfield and buying chips en route to a liaison with topless model Corinne Russell, who just happens to be dressed in leather gear and riding a mechanical bull in her bedroom when he gets there. All perfectly plausible – and daft as a brush!

AC/DC in widescreen. This ‘no expense spared’ 1990 promo features a mammoth set, innovative camerawork designed to show off Angus’s on-stage footwork from underneath the stage, and a cast of thousands of AC/DC fans watching the band in what could easily pass for a Roman amphitheatre. Once seen, never forgotten, you simply can’t help but be seduced by the whole ‘over the topness’ of it all.

A magic Bon moment as the frontman hams it up as a fiery rock n’ roll preacher at the pulpit, lecherous perma-grin to the fore. The rest of the band (featuring bassist Cliff Williams for the first time), dressed up as altar boys, keep the music pulsing and pumping, while Angus’s home-made cardboard halo is a piece of sheer theatrical genius. Rarity alert: the clip also intersperses some rehearsal room footage of Angus performing the song wearing long trousers.

Placed high on this list not because it’s one of the best AC/DC promos, but because it’s certainly one of the most poignant. Featuring live performance from the Black Ice tour, it showcases the line-up of Angus, Malcolm, Brian, Phil and Cliff playing together in a way we’ll never see again. The looks on the faces of the many fans featured here tell you all you need to know about the enduring appeal of this special band.

The biggest song on the Arnold Schwarzenegger movie The Last Action Hero surely has the most memorable of all AC/DC videos to accompany it. A cigar-chewing Arnie pitches up at a packed DC gig, lights his cheroot with some dynamite, checks out all of the band members, then morphs into an Angus clone. The big man really gets into the role, duckwalking like a good ‘un and even carrying Angus around the stage, much to the crowd’s delight. Arnie loves it, the band love it – and as fans, we can’t help but love it too.