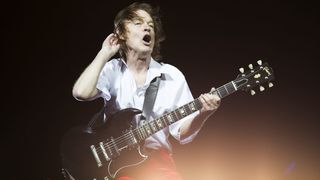 A spokesperson for AC/DC drummer Chris Slade says guitarist Angus Young has no plans to retire once after their tour dates with Axl Rose.

The band are currently delivering the Rock Or Bust shows that were postponed when frontman Brian Johnson was forced to stop performing as a result of hearing issues. Guns N’ Roses vocalist Rose has taken his place.

Replying to a fan comment, the spokesperson says via the Chris Slade Timeline Facebook page: “Angus is definitely not thinking of retiring.”

The source also reports: “Axl is doing a wonderful job and the majority opinion now is that the band were right to finish the tour with him.

“It’s a once-in-a-lifetime opportunity to see the band in this form. Everyone would like it to be Brian up there, but due to his health problems this is not possible.”

AC/DC offered refunds to those who didn’t want to attend the concerts featuring Rose. The spokesperson says: “Fans have the opportunity to go to the shows or not. It is entirely their choice – or indeed their loss.”

Rose stated before the tour that he’d be happy to remain on board if the band continued, saying: “I’m in if they want me in.”

Johnson this week met with a hearing expert who believes he can provide equipment that will allow the singer to resume his performing career.

AC/DC: Why Black Ice and Rock Or Bust are the perfect way to end it all