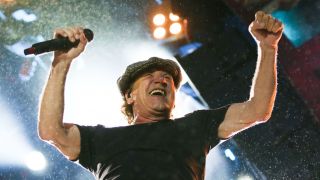 Brian Johnson says he’s lucky to have fronted AC/DC for 36 years after learning he will never regain his hearing.

Last month he admitted he felt “crushed” after being ordered to stop touring last month or risk going deaf – and insisted that he would not be retiring despite Axl Rose taking over live duties.

But the 68-year-old frontman says he is grateful for his long tenure with “one of the best bands in the world.”

He tells Sirius XM (via Rolling Stone): “It’s like a young sports player getting an injury. I feel sorry for athletes, being 24, 25 and they have an injury and it ends their career. It’s an awful thing.

“But I’m lucky and I’ve had such a great life. I’m 68, and I’ve had a pretty good run. I’ve been in one of the best bands in the world – and I had so many good times with the boys.”

He adds: “I’m just thankful really that I came out of it in one piece. Now I guess I could rest me socks off.”

Johnson says he first noticed his hearing loss at a race eight years ago when he felt a “little pop” in his ear. It turned out to be tinnitus, which he suffered from for six months before it cleared up.

But the singer says his hearing deteriorated further following AC/DC’s performance during a rainstorm at their Winnipeg show in September last year – after which he and guitarist Angus Young had caught fevers.

He adds: “We were dripping wet, soaking wet, absolutely freezing. Unfortunately the fluids went up into my sinuses and around my ear.

“I was getting worried because my right ear is my good ear. My left ear is just about totally deaf.”

Johnson visited Sydney-based hearing specialist Dr Chang, who told him that the fluids had crystalised and had been “eating away” at his ear. After he was taken into hospital to be treated, the doctor eventually told Johnson that he would not regain his hearing.

Despite the bad news, the singer hit the US for a string of shows – though he was warned by Dr Chang that he was “killing his ears.” He eventually bowed to pressure from his concerned bandmates after they told him to put his health before touring.

Johnson says: “If I’d have kept on going, there was a possibility I would never hear again. Angus and Cliff just said, ‘Johnno, you’ve got to think of your health.’ And everybody else said, ‘Brian, your health comes first. You’ve done a whole year on the road. You’ve done everything. We want to finish.’

“And that’s what they did. It’s simple. What people don’t understand is it is what it is.”

AC/DC are the cover stars of the current edition of Classic Rock, on sale now in print, digital and via TeamRock+.